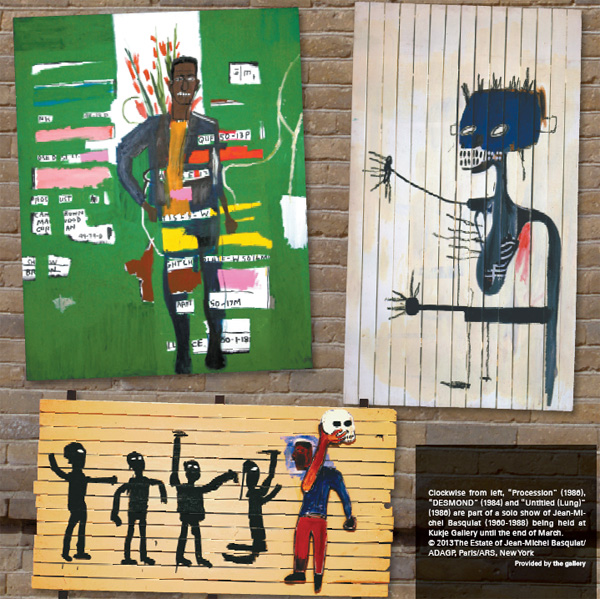 Rebellious teen years, a rise to fame at the age of 20, scandal, drug addiction and an untimely demise at 27 - these are elements that make an artist a legend. They also describe the life of Jean-Michel Basquiat (1960-1988), who started as a graffiti artist on the streets of New York and quickly evolved into an internationally acclaimed neo-expressionist.

Still, many in Korea haven’t had a chance to see Basquiat’s works in person or to consider whether his fame is purely from his paintings or is partly from the halo effect of his short and dramatic life. A solo show of the artist going on at Kukje Gallery presents that opportunity.

The exhibition features 18 works the American painter made between 1981 and 1988.

The gallery explained in a release that his paintings are characterized by eclectic references to historical black heroes (like jazz musician Charlie Parker, and baseball player Hank Aaron), comic books, anatomy, graffiti and issues of race.

Works on display such as “DESMOND” are clear examples of how Basquiat, as an African American, was interested in minority and social class issues.

But why anatomy? Basquiat was hit by a car at the age of 7 and while recovering from an operation in which his spleen was removed, his mother gave him a copy of the medical text Gray’s Anatomy. “Untitled (Hand Anatomy)” and “Untitled (Lung)” reveal his anatomical inspiration.

Death was also among Basquiat’s obsessions. “Untitled (Lung)” and “Procession” allude that death is unavoidable to all humans, just like old European paintings of the vanitas genre.

After participating in The Times Square Show in 1980, his first gallery hanging, he barreled down the expressway of fame, becoming the youngest artist to be invited to dOCUMENTA in Kassel, Germany, in 1982. But he became obsessed with the idea that galleries were abusing him. In 1988, Basquiat died of a drug overdose.

Asked whether his fame has grown swollen because of his dramatic life, art critic Yoo Jin-sang said, “Anyway, we can’t talk about American art of the 1980s without Basquiat, who represented the emergence of the counterculture and the sociopolitics of the time.”