The Afghan teens of ‘Buzkashi Boys’ stargaze in Hollywood

The Afghan teens of ‘Buzkashi Boys’ stargaze in Hollywood 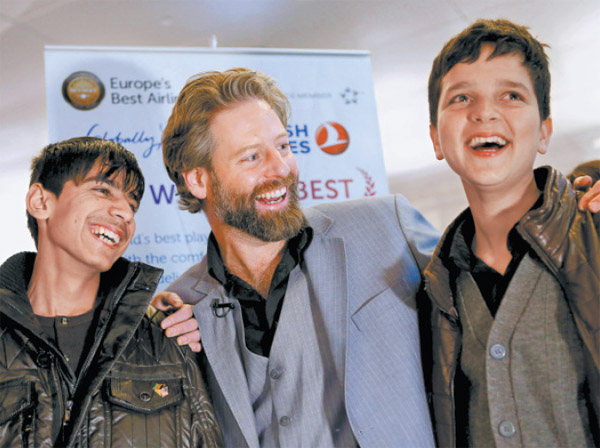 LOS ANGELES - The teenage stars of an Oscar-nominated short film from Afghanistan arrived in Los Angeles on Wednesday for the Academy Awards after an Internet campaign raised enough money to pay for their trip.

“Buzkashi Boys” actors Fawad Mohammadi and Jawanmard Paiz will walk the red carpet and rub shoulders with Hollywood’s biggest stars at the Dolby Theater in Los Angeles on Sunday night.

The film focuses on two children growing up in Kabul who dream of becoming Buzkashi riders, horsemen who compete in the dangerous Afghan national sport similar to polo in which riders try to carry a headless goat across a goal line.

Its producers launched the campaign because, they said, they lacked a travel budget for the 14-year-old actors.

“I’m so happy and excited,” Mohammadi told Reuters at Los Angeles International Airport after flying more than 18 hours from the Afghan capital. “I can’t say my feelings.”

Some 237 people donated money to the travel fund, which raised $11,751, eclipsing its $10,000 goal, fundraising Web site Rally.org said. Donations were received from 13 countries, including the United States, Afghanistan, India and Germany.

Turkish Airlines donated the tickets for Mohammadi, Paiz and a chaperone.

Mohammadi, an amateur actor with piercing green eyes, gained international attention following the film’s release last year for his personal story as a fatherless youth who grew up selling maps of Kabul to tourists in its Chicken Street market.

Both teens said they wanted to see all the actors during their week in Hollywood in which they also plan to visit amusement parks Disneyland and Universal Studios.

Speaking of famous actors, Mohammadi said: “I can’t say ‘this one’ or ‘that one,’ [but] I want to see Rambo, Sylvester Stallone.”

One of the boys in the film is a street kid like Mohammadi, the other the son of a blacksmith forced to spend long hours in his father’s dark workshop sharpening ax heads.

French said the goal is to make the week-long trip culturally relevant for the teens.

“Just the fact that we’re talking about something other than the war, other than bombs and bullets, I think is a huge step forward,” French said. “And hopefully we can show that these kids are like normal kids everywhere.”

Mohammadi and Paiz will fly to Washington for screenings of the film on Feb. 27 and begin their journey back to Kabul on March 1.

“Buzkashi Boys,” which runs for just 28 minutes, is the first film to be produced by the Afghan Film Project, a non-profit group that aims to train filmmakers in Afghanistan.