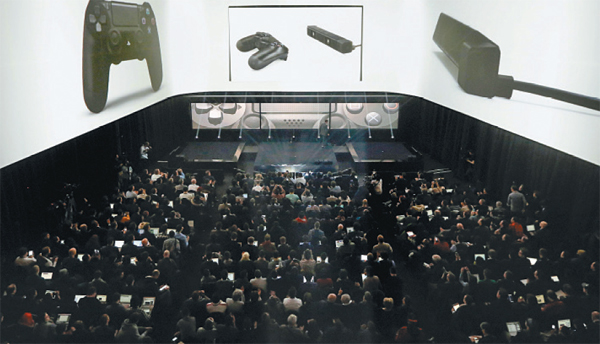 Andrew House, CEO of Sony’s PlayStation unit, announced the product yesterday at an event in New York. Consumers will be able to see what friends are playing and take over games in progress from others, and will eventually be able to stream older titles.

The company didn’t announce a price or an exact launch date. The console will go on sale for the year-end holiday season, Sony said.

The PlayStation 4 makes its debut amid an industry shift toward mobile play on smartphones and tablets, raising the question of whether gamers will shell out several hundred dollars for a new device.

The console will allow self-publishing, mimicking the open architecture of smartphones that encourages smaller developers to create titles for the growing ranks of casual players.

“This enhanced PlayStation experience is simply not revolutionary to overcome big disruptions facing the industry,” Amir Anvarzadeh, a Singapore-based manager for Asia equity sales at BGC Partners said in an e-mail. “Sony’s heavy emphasis on the social aspect of PS4 seems a bit too ambitious to deliver on.”

Mobile games and those downloaded to computers are taking a bigger portion of sales at the expense of traditional gear. U.S. revenue from those titles rose 16 percent last year to $5.9 billion, according to Port Washington, N.Y.-based researcher NPD Group. Sales of the titles for consoles fell 21 percent to $8.9 billion.

Sony is working to combat mobile devices with hardware and software that will make games available to play or share at the press of a button on a console, the PlayStation Vita portable player or even a smartphone.

The new PlayStation will include social-gaming features that let players tag and share videos and watch what others are doing at the same time, according to Mark Cerny, the lead architect, who demonstrated the new controller, the DualShock 4, which includes a touchpad and “share” button.

“We’ve taken a deeply consumer-focused and developer-centric approach to the PlayStation 4,” Cerny said.

Personalization will be a compelling feature, Cerny said. The system is designed to learn players’ likes and dislikes. Based on those, it will make recommendations, have potential purchases ready and let customers begin playing new titles before they are fully downloaded to the machine’s hard drive.

“Game-wise, it was an absolute home run,” said Michael Pachter, an analyst at Wedbush Securities in Los Angeles.

The console will appeal to Sony’s core gaming audience with exclusive titles, and could give it a lead over Microsoft by making games easier to develop using a PC-based architecture. Hirai has said he considers the console to be the centerpiece of a universe of exclusive content running on Sony phones, tablets and TVs.

“What we’re creating is the fastest, most powerful network for gaming in the world,” said David Perry, CEO of Sony’s Gaikai online game service.

The company will probably set the price for the device after seeing how sales of Nintendo’s Wii U go, Keita Wakabayashi, an analyst at Mito Securities in Tokyo, said by phone yesterday. Nintendo cut its unit sales forecast for the Wii U to 4 million from 5.5 million through March as it struggles to compete with Apple and Samsung Electronics tablets. Bloomberg