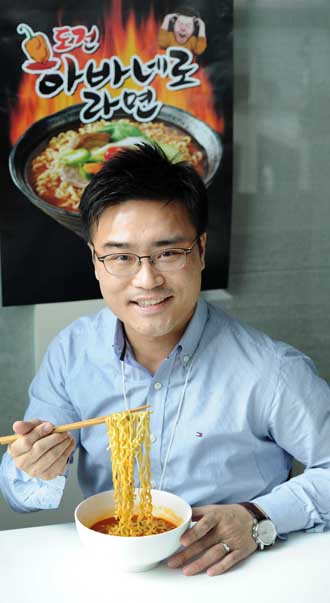 While other retailers have been mired in a winter sales slump, Korea’s largest discount chain is celebrating the success of its private label “Let’s Go! Habanero” ramen, which has generated more than 1.22 billion won ($1.1 million) since its introduction at the end of October.

“When I went on a business trip to Japan, I saw ‘Tyrant Habanero Snack’ made of habanero chilis making a great hit in the middle of a long-term economic downturn and got the idea to use habanero chili in ramen,” said Cho Ki-joon, a buyer at E-Mart, who developed the product in cooperation with Samyang Foods.

After researching habanero peppers, Cho found them listed as the hottest pepper in the world in the “1994 Guinness Book of World Records” at 200,000 to 300,000 on the Scoville scale, a measurement of spicy heat. He also found that habanero was easy to pronounce and remember.

But the key point is that it should not only be spicy, but addictive with a taste that differentiates it from other instant noodles.

“I struggled to find the taste with Samyang Foods for more than three months,” said Cho.

Eventually, Cho and researchers from Samyang Foods went on a tour of popular restaurants famous for spicy foods in Seoul.

They concluded the key was a blend of pungence and sweetness.

“Taking a cue from the spicy beef-rib stew at a restaurant in my hometown Dongin-dong, Daegu, North Gyeongsang, I decided to make a deep and sweet tasting soup through steamed beef-rib stew and fried onions,” said Cho.

Habanero ramen was chosen as the spiciest ramen in the world by Hans Lienesch, an American ramen blogger known as the “God of Ramen.”

Depending on the success of habanero ramen, E-Mart plans to arrange a Habanero Zone for spicy products by summer.

It will also launch Cup Habanero and Habanero Champon next month.