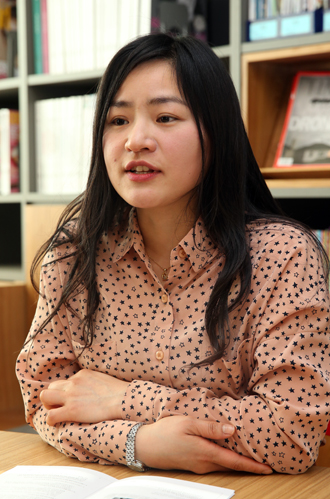 Seo Soo-yeon was the first person in the country to be a writer for audio descriptions. The job is to make visual arts accessible for the blind.

The 36-year-old started writing scripts that describe images in TV dramas, movies and musical performances 10 years ago. Today, there are 23 audio description writers in Korea.

As a writing major, Seo’s first job was at KBS, the national broadcast corporation. She participated in a community service program to read books for visually challenged people in 2001, which inspired her to become “a writer for the blind.”

At KBS in 2003, Seo started writing scripts for “Love on a Jujube Tree,” one of the longest-running dramas.

Before she writes scripts of a drama, Seo closes her eyes and listens to it. She takes notes when only listening to a scene because she believes she can do her job better by experiencing what blind people experience.

“Those with blindness are extremely sensitive to every single sound on TV,” Seo said. “They want to know what extra people are doing behind main actors.

“My goal is to describe things in detail as much as possible in order to minimize their questions when they listen to my description.”

Although Seo is a veteran writer, she says writing for audio description remains challenging. She finds writing scripts for blockbuster movies most challenging.

“Portraying large-scale warfare with lots of sound effects in a few sentences is very difficult,” she said.

The writer said she also struggles to describe a scene in a melodrama showing an actress thinking about her beloved.

“In a medical drama, a doctor unfolded a set of implements before he begins surgery, but I didn’t know how to describe the moment when the doctor rolled out the different kinds of implements and grabbed one of them, because I didn’t know the exact name of the tool,” Seo said. “We have to look up such technical words on our own.”

Most of the content for the blind is produced by the Korea Blind Union’s Media Access Center (MAC), located in Gongdeok-dong, western Seoul. Local broadcast corporations consign their TV series to the MAC for audio description. Seo also works at the center. Others like Seo write scripts and then actors record the written scripts. The recordings are sent back to the broadcast stations to be aired.

The Web site of the MAC (www.kbumac.or.kr) provides a variety of audio description content for the blind.

Recently, Seo has been interested in a project by Standard Chartered Bank dubbed “Kind Library.” About 200 employees and executives of the bank and outside volunteers make audio books and movies.

“Even though I have to work overnight, I forget the fatigue when I see blind people like what I made,” she said.

“I hope audio description will eventually expand into all kinds of visual arts and be available for home shopping programs,” she added.