Park shows a commanding side

Park shows a commanding side 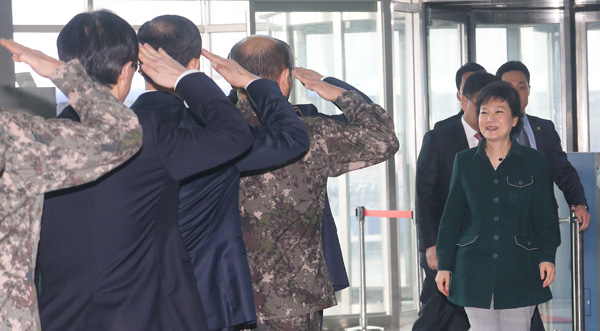 President-elect Park Geun-hye, right, is saluted by top defense officials including Chairman of Joint Chiefs of Staff Jung Seung-jo and Defense Minister Kim Kwan-jin yesterday during a visit to the Joint Chiefs of Staff. With her inauguration on Monday, Park will be the first female commander-in-chief of Korea’s military. [NEWSIS]

Park becomes the first woman president of Korea on Monday - and the first female commander-in-chief of the nation’s military.

In an apparent move to ease concerns about a possible weakening of national security, Park made the visit to the South Korea-U.S. Combined Forces Command and South Korea’s Joint Chiefs of Staff yesterday.

“Despite South Korea and the international community’s concerns, North Korea continued to develop nuclear weapons and stage provocations against the South,” Park said. “I and the government will never tolerate a nuclear-armed North Korea. We will establish a complete system to restrain the North with a strong South Korea-U.S. alliance.”

During the visit, Park also stressed that South Korea and the United States have an alliance forged in blood by fighting together in the 1950-53 Korean War. Park promised that she and her government will do their best to deepen the ties.

The opposition Democratic United Party criticized Park’s decision to bring Kim Byung-kwan, her defense minister nominee, to the military command before his appointment was confirmed by the National Assembly.

The DUP said Kim’s confirmation is uncertain due to corruption allegations surrounding him and his family and Park brought him to a sensitive event to push the appointment.

After Park nominated the former Army general on Feb. 13, opposition lawmakers and the media questioned his integrity. The DUP pressured him to give up his nomination for having worked as an advisor for an arms dealer. He was also accused of violating laws when he gave real estate to his children.

Kim’s confirmation hearing has yet to take place.

Observers said Park’s decision to bring him to the visits yesterday shows her confidence in him. “Although the Democrats will likely attack him at the confirmation hearing, I don’t think Park has any intention to withdraw the nomination yet,” an aide to Park told the JoongAng Ilbo.