Kim Yong-joon, center, head of the presidential transition team, announces a road map to a “new era of people’s happiness and hope” yesterday at the briefing room for the transition team in Samcheong-dong, central Seoul. The transition team will disband today after seven weeks of work. [Joint Press Corps]

The incoming Park Geun-hye administration announced a road map to a “new era of people’s happiness and hope” with five major initiatives. 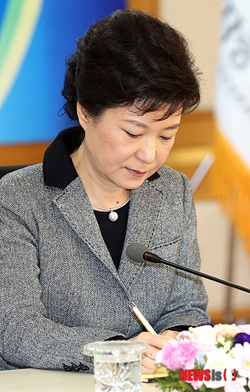 On the eve of Park’s inauguration Monday, her transition team concluded its 48 days of work by saying the five major policy goals for the new administration will be building an innovative economy focused on job creation; providing targeted welfare and job programs; enriching people’s lives with creative education and culture; creating a society that is safe and unified; and establishing the foundation for an era of unification.

“Although Korea’s economy has grown large, the happiness of individual citizens is low,” Kim said. “To effectively realize this vision and agenda, the government, above everything, must be trusted by the people. The Park administration will win public trust by communicating with the people to maximize its driving force to push forward the policies with integrity and transparency.”

To create an innovative economy focused on job creations, Kim said, the Park government will use imagination and creativity and encourage convergence among industries. 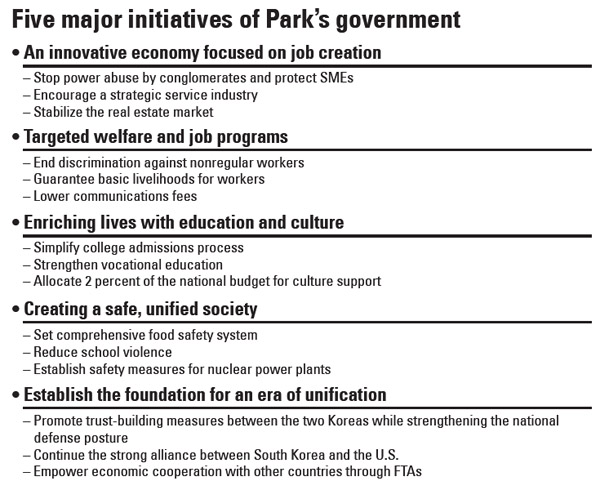 For the goal of targeted welfare, the government will help the general public by boosting employment.

In order to build the foundation for unification, the Park administration will promote trust building between the two Koreas while strengthening the national defense posture, Kim said.

According to the transition team, 210 bills need to be passed to realize the administration’s agenda. The new administration will prepare more than 150 of them before the end of this year.

The road map announced yesterday included some specifics, including a new pension for senior citizens over 65 and a plan to shut down the powerful Central Investigation Unit of the Supreme Prosecutors’ Office.

Conspicuously missing, however, was any follow-through on Park’s campaign pledges to pursue “economic democratization.”

Yoo Sung-kull, who was in charge of economic affairs for the transition team, said the term was not used in the road map, but the philosophy was reflected in many specific tasks.

Representative Lee Hyun-jae, another economics consultant in Park’s transition team, said yesterday that the key to economic democratization was to stop the power abuse by conglomerates while protecting the small- and medium-sized enterprises.

“To this end, we give power to the Small and Medium Business Administration, Board of Audit and Inspection and Public Procurement Service to bring legal cases against conglomerates,” Lee said. “Various support measures for small companies also reflect the idea of economic democratization.”

The so-called economic democratization, which is mentioned in Korea’s Constitution as a national goal, was one of the three major pledges when she declared her presidential bid in July last year. The other two were more jobs and welfare benefits. Economic democratization was a source of friction in the transition team. Some people on the team thought economic growth was more important, including Saenuri’s floor leader, Lee Hahn-koo.

Kim Chong-in, co-chair of Park’s presidential campaign, was a proponent of polices for economic democratization. Kim did not get a senior post in the Park government or Blue House, and analysts think that strong measures against the chaebol are not likely.

Kim Sang-Jo, professor of economics at Hansung University, disagreed. “It was the biggest topic during the legislative and presidential elections,” Kim said. “It is very disappointing to exclude it from the five major agenda items.”