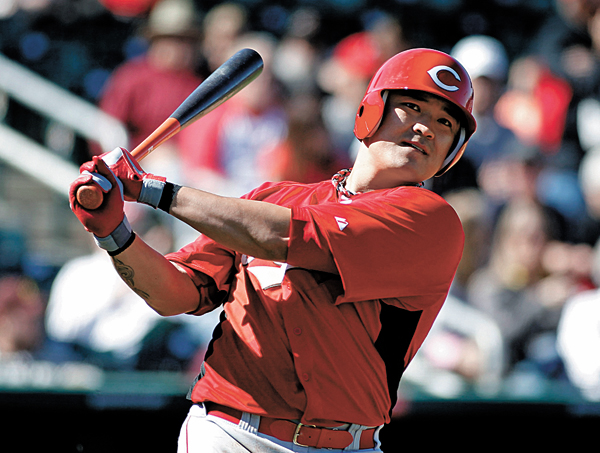 GOODYEAR, Arizona - Once the Tigers tossed Ryan Raburn aside, the Indians happily snagged him.

Raburn helped his chances to make Cleveland’s roster as a utility player by hitting two more homers Saturday, and the Indians outlasted the Cincinnati Reds 13-10 in another high-scoring exhibition between Ohio’s major leaguers.

Raburn also homered in Friday’s spring opener and has connected for a homer in his three at-bats this spring, driving in five runs. He was released by Detroit in November following a disappointing season. Raburn opened 2012 as the Tigers’ starting second baseman, but batted just .171 in 66 games and was demoted to the minor leagues. When Indians manager Terry Francona was hired in October, he targeted Raburn, telling general manager Chris Antonetti that if the 31-year-old ever became available to scoop him up.

“Sometimes by the luck of the draw you might have a chance to get a guy like that,” Francona said. “Maybe we caught a break.”

Raburn can play second, third, right or left field. His versatility is what initially attracted him to Francona, who has seen players in the past move to a new team and thrive.

“He had a tough year,” Francona said. “That happens. If he would have had a good year, we wouldn’t have had a chance to get him.”

For the second straight day, hitters on both teams teed off on pitchers still working on mechanics and location. The Reds and Indians have combined for 44 runs and 62 hits while playing for 6 hours, 47 minutes.

Choo Shin-soo singled and scored twice for the Reds, who plan to bat the center fielder in the leadoff spot this season. Cincinnati had the NL’s lowest on-base percentage from the top of the order last year, and manager Dusty Baker believes Choo can get the Reds started.

Choo, who batted in the No. 1 spot 98 times for the Indians in 2012, has reached base three times and scored three runs in two games.

“That’s what Choo is here for,” Baker said. “You can read into it as much as you like. We like that if he gets on like this, think of the year that Brandon [Phillips] is going to have Joey [Votto], [Ryan] Ludwick and [Jay] Bruce. This is going to be exciting.”

Indians starter Brett Myers allowed two earned runs in two innings. The right-hander is in Cleveland’s rotation after making 70 relief appearances for Houston and the White Sox a year ago. AP