The shifting presidential inaugurations through the years

The shifting presidential inaugurations through the years 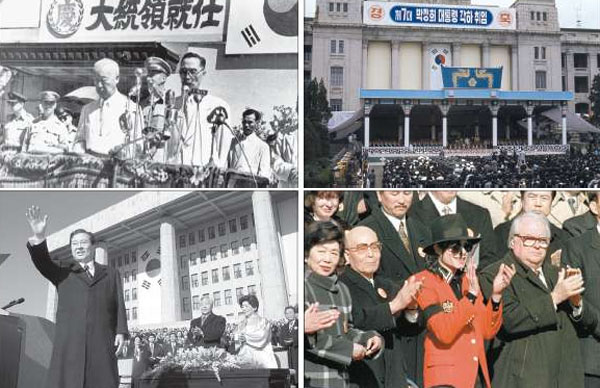 Korea is a young democracy. The country has had only ten presidents prior to Park Geun-hye.

Just as the Korean government has switched from an authoritarian, military-oriented government to a more approachable, people-friendly one over the past 60 years or so, inauguration ceremonies of the country’s leaders have also evolved from authoritarian, stiff events to softer, more enjoyable happenings.

Korea’s first president Syngman Rhee (1875-1965) was inaugurated on July 24, 1948 at the capitol building in today’s Gwanghwamun area, setting the tone for inauguration ceremonies. Since it took place right after the division of the South and the North, Rhee’s speech contained a lot of anti-communist rhetoric.

While most of the following inauguration ceremonies were used as a tool to highlight the absolute power of the leader, things changed after 1987, when Korea adopted the constitutional reform of a direct election system for president and became a true democracy.

For the 1963 inauguration ceremony of Park Chung Hee (1917-1979), the duties were systematically distributed - the administration department was in charge of the overall banquet; the PR department oversaw celebratory events; and the foreign affairs department handled dinner. At the 1980 inauguration ceremony of Chun Doo Hwan, who came into power through a coup d’etat, people even sang the so-called “anthem for president.”

Korea’s 13th president Roo Tae-woo, who was inaugurated on Feb. 25, 1988, chose the area in front of the National Assembly as a symbol of people power, and that has been the custom all subsequent presidents have adopted. He also invited ordinary citizens like street cleaners, drivers and those suffering from leprosy. The 25,000 guests were seated on a first-come, first-served basis, not depending on their status or class. It was also the first inauguration ceremony of a president that played gugak, or traditional Korean music.

Kim Young-sam chose to do away with the traditions of forming a group of people forced to cheer as well as throwing balloons and flowers into the air at the ceremony. The event also used recycled paper for invitations.

But it was the inauguration of 15th president Kim Dae-jung (1924-2009) that more actively and creatively attempted to invite and induce participation from the wider spectrum of Korean people, in line with the name of the administration, “People’s Government.”

Kim invited American pop star Michael Jackson, whom he had built personal ties with, to the event. Jackson gave Kim a hug of encouragement. Also, it was the first inauguration ceremony to allow celebrities to perfom. Hip-hop group DJ DOC, whose song Kim had used as one of his campaign songs, also performed.

Kim got rid of the roof over the platform and it was supposed to recreate the look of the Acropolis of Athens. He allowed some ordinary citizens to be seated on the platform.

Roh Moo-hyun, who adopted the name “Participatory Government” for his administration, allocated half of the guest seats - around 20,000 seats - for anyone that submitted an Internet application in advance, in addition to receiving ideas for the event from the public. Crossover popera artist Lim Hyung-joo sang the national anthem, while the hot boy band of the time “god” performed.

Lee Myung-bak, who was inaugurated on Feb. 25, 2008, further attempted to get rid of authoritarian elements in the ceremony, replacing the emblem of the phoenix with the taepyeongso (traditional Korean oboe) and traditional drum. The highest number of celebrities took part in the event, including outspokenly liberal entertainer Kim Je-dong who was MC for one of the ceremony’s programs; actress Song Yoon-a, who recited a poem; and SS501, who performed.