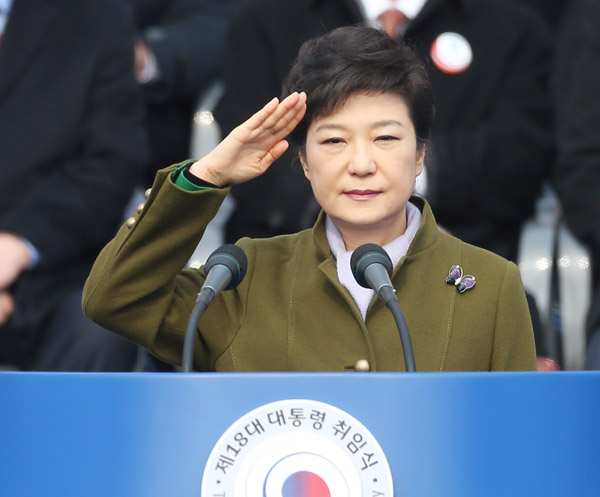 Park Geun-hye salutes during her inauguration ceremony as the 18th Korean president at the National Assembly in Seoul yesterday. Park took office as Korea’s first woman president asking the people to join her effort to open a “new era of happiness and hope” in her inaugural speech. By Kim Hyung-soo

President Park Geun-hye took the oath of office yesterday as Korea’s first woman president and asked the people to join her government’s effort to open a “new era of happiness and hope.”

In a grand ceremony at the National Assembly, Park gave an inaugural address that presented three major visions for her government.

About 70,000 people including leaders of the ruling and opposition parties and dignitaries from abroad attended the event. 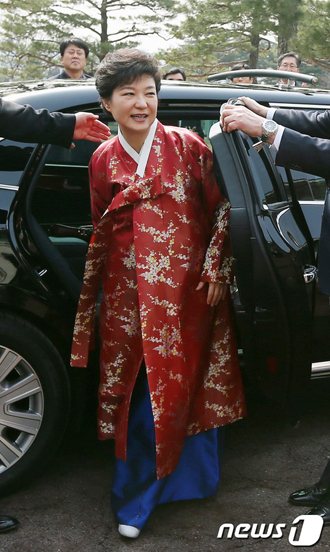 Park paid a visit to the National Cemetery before the inauguration and attended an outdoor celebration at Gwanghwamun Plaza on her way to the Blue House.

“As President of the Republic of Korea, I will live up to the will of the people by achieving economic rejuvenation, the happiness of the people and the flourishing of our culture,” she said.

“Today, we are confronted anew with a global economic crisis and outstanding security challenges such as North Korea’s nuclear threat,” Park said. “At the same time, capitalism faces new challenges in the aftermath of the global financial crisis.

“The tasks we face today are unlike any we have confronted before,” she said. “And they can only be overcome by charting a new pathway by ourselves.”

Park wrote the speech herself with the support of her aides, and it used the words “Korean people” 57 times and “happiness” 20 times.

Five years ago, Park’s predecessor Lee Myung-bak gave a much longer speech to emphasize the attention he would pay to help advance the country. Park’s inauguration speech yesterday showed that the government’s goal has shifted from the overall development of the nation to the happiness of every individual citizen.

Park described a determination to fuel economic growth through science and technology.

She also issued a strong condemnation of North Korea.

The first keyword introduced in the speech was “economic revitalization.” The 61-year-old daughter of the late strongman Park Chung Hee reminded the public of her father’s achievements by mentioning the “Miracle on the Han River” and promised that her government will create a second Miracle on the Han River.

“Economic revitalization is going to be propelled by a creative economy and economic democratization,” Park said. Defining her concept of a creative economy as “the convergence of science and technology with industry, the fusion of culture with industry and the blossoming of creativity in the very borders that were once permeated by barriers,” Park promised to raise Korea’s science and technology to world-class levels. She said her new Ministry of Future Planning and Science will play the key role in realizing that vision.

She said she will also offer opportunities to talented Korean people around the world to serve their homeland. Park already invited Kim Jeong-hun, a former president of Bell Labs and chief strategy officer of Alcatel-Lucent, to head her new Ministry of Future Planning and Science. Kim, a Korean-born enterpreneur who had migrated to the United States, recently gave up his U.S. citizenship to take the ministership.

Park also stressed the importance of the so-called economic democratization in the speech, a major theme of her presidential campaign aimed at reforming business practices of the conglomerates while providing assistances to smaller companies.

When Park’s transition team made public her administration’s governance road map last week, the term was conspicuously missing, but it made a grand return in her speech yesterday.

Park stressed that happiness for the people is a main goal, and she reminded the people of her pledges of wider welfare programs.

“No matter how much the country advances, such gains would be meaningless if the lives of the people remained insecure,” she said.

She also promised to build an education system to foster creativity and a safe society, particularly for women and people with disabilities.

“We will build a society where fair laws prevail rather than the heavy hand of power and where the law serves as a shield of justice for society’s underprivileged,” she said.

In the last part of her speech focused on “a flourishing culture,” Park unveiled her policy on North Korea. In strongly worded remarks, she condemned the nuclear arms programs of the North and reminded it of her promise to try trust-building efforts.

“I pledge to you today that I will not tolerate any action that threatens the lives of our people and the security of our nation,” she said. “North Korea’s recent nuclear test is a challenge to the survival and future of the Korean people, and there should be no mistake that the biggest victim will be none other than North Korea itself.”

Park urged the North to give up its nuclear ambitions “instead of wasting its resources on nuclear and missile development and continuing to turn its back to the world in self-imposed isolation.”

While criticizing the North, Park said trust-building efforts will continue during her five-year presidency. “I will move forward step by step on the basis of credible deterrence to build trust between the South and the North,” she said.

While Park did not elaborate on “credible deterrence,” her government’s road map announced last week made clear the importance of solidifying Korea’s alliance with the United States. Park also named hard-line officials to key posts in her government and the Blue House to oversee national security policies. Her transition team vowed to spend more money to strengthen military capabilities against the North’s threats.

“Trust can be built through dialogue and by honoring promises that have already been made,” she said. “It is my hope that North Korea will abide by international norms and make the right choice so that the trust-building process on the Korean Peninsula can move forward.”

She also said her government will strengthen trust with countries in the region including the United States, China, Japan, Russia and other Asian countries. Concluding her speech, Park said the success of her presidency lies with trust between her government and the people. “I will earn the trust of the people by ensuring that our government remains clean, transparent and competent,” she added. “I will endeavor to shed popular distrust of the government.”

Reminding the public of the Koreans’ deep-rooted spirit of community, Park asked the people to trust her government and work together in order to open “a new chapter in the Miracle on the Han River.”