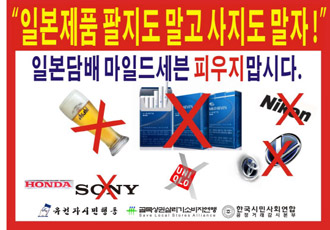 Local merchants including restaurants and small supermarket owners declared yesterday they will not sell Japanese products as a protest against the Takeshima Day event held in Japan last Friday.

Takeshima is Japan’s name for Dokdo and on Friday, Shimane Prefecture held an event honoring the islets that was attended by a record number of Japanese lawmakers and a vice-ministerial government official, Aiko Shimajiri.

The annual event is intended to strengthen Japan’s territorial claims to the Dokdo islets.

It was the first time a central government official attended the event. Shimane Prefecture designated Feb. 22 as Takeshima Day in 2005.

The Save Local Stores Alliances, supported by 140 civic groups and associations of merchants including the Korea Foodservice Industry Association and the Korea Internet-PC Culture Association said yesterday they will not sell Japanese products such as Mild Seven cigarettes or Asahi Beer in their stores and also won’t buy other goods made by Japanese companies like Nikon, Toyota, Honda, Sony and Uniqlo.

About six million merchants nationwide are members of the alliances. They include restaurants, karaoke bars, small supermarkets and electronics stores. They claim to sell 80 percent of the Japanese products distributed in the country.

“We will not sell those products from Samiljeol, Independence Movement Day on March 1, until the Japanese reflect on the past sincerely and stop claiming Dokdo,” said Oh Ho-suk, co-chairman of the Save Local Stores Alliances. “We will not sell Mild Sevens and Asahi beer, for we are the final seller of such products. As consumers, we’ll boycott other Japanese brands.”

Oh added that merchants will post stickers in their stories to notify customers of the boycott.

Last year, these groups stopped accepting Shinhan and Samsung credit cards in protest against high transaction fees levied on small businesses and the fees were lowered. They also demanded large retail discount chains such as E-Mart and Lotte Mart not open on some weekend business days, and the government took up that campaign.

But some worry about a boycott of one of Korea’s most important trade partners.

“Korea trades many important electronic components to and from Japan,” said Yoo Byung-gyoo, an official at the Hyundai Research Institute. “The two countries should not solve diplomatic problems economically because it generates economic losses in both countries.”

Some restaurant and karaoke bar owners questioned whether merchants would stick to the boycott.

“We rely heavily on Japanese customers,” an owner of a Korean restaurant in Jongno District, central Seoul, said. “I don’t think Japanese tourists would like to see those boycott stickers when they come to eat. Due to the poor economy, Koreans are not spending as much money as they used to at restaurants, but tourists from Japan and China have helped us stay in business.”