Seeing the potential for Serbia-Korea relations

Seeing the potential for Serbia-Korea relations 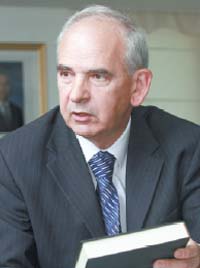 Though Korea-Serbia diplomatic relations have not attracted much of the spotlight since they were established in 1989, Serbian Ambassador to Seoul Slobodan Marinkovic says there’s a lot of room for the relationship to grow.

“So far, we have not known enough about each other and we have not worked together sufficiently,” the envoy said in an interview with the Korea JoongAng Daily earlier this month. The interview was conducted ahead of Serbia’s Statehood Day on Feb. 15, which commemorates the uprising against Turkish Ottoman rule in 1804 that led to independence.

“Both countries in their overall development have good and quality materials [for trade] that are yet to be discovered and used as the basis for the future [relationship],” Ambassador Marinkovic said.

Over his more than three years serving as ambassador to Korea, Marinkovic has tried to strengthen bilateral ties by making Koreans more aware of his homeland and vice versa. When he was first posted in 2009, he set two goals. The first was to educate Koreans about his homeland because few know much about the landlocked European nation of 7.3 million. Secondly, he wanted to strengthen the foundation for future development of the relationship between the two nations.

“Whenever I could, I responded to all Korean invitations that had an aim to promote multilateral and bilateral relations or Korea itself,” he said.

Relations between Korea and Serbia have followed a winding road because of social and economic difficulties on both sides. Over their 24 years of diplomatic ties, both countries have experienced tough times. Korea experienced the Asian economic crisis in the late 1990s, and Serbia went through the Yugoslav Wars. As a result, Korea and Serbia have at times closed and reopened their respective embassies and in certain periods have lowered their level of diplomatic relations.

“With every change in diplomatic relations, the same jobs were started from the beginning,” Marinkovic said.

According to the ambassador, past diplomatic activities were primarily related to things like bilateral agreements to encourage investment and attempt to facilitate business between the two countries.

Putting the past behind him, Marinkovic said there is a lot of potential for bilateral cooperation in the future considering the commonalities the two countries share.

“From my point of view, Korea and Serbia are countries with almost the same territorial size, nearly identical geographic positions in the northern hemisphere, similar climate and other natural features that are resulting from it,” he said. “Our two countries also share a similar history and similar war sufferings and sacrifices in relation to the homeland, freedom and independence.”

As the starting point to expanding ties, Marinkovic pointed out that the Serbian defense offerings could be competitive in the Korean market as well as other sectors like automobiles, electronics, energy, mining, food processing and steel production.

“Strengthening cooperation in the area of health, spa and mountain tourism could also help in upgrading ties,” he said. “The exchange in the field of culture, particularly the film industry, would be also interesting.”

The new government in Korea under President Park Geun-hye could bring new opportunities, according to the ambassador.

“New time brings new opportunities,” he said. “I hope it [the new government] will work in favor of our common interests and that it will open new opportunities for cooperation that were started with the entering of the first Korean companies such as Yura Corporation in Serbia.”

He also invited President Park Geun-hye to visit his country.

“That could be the first visit at the highest level in the relations between our two countries,” he said. “President Park is known for many great things she has done for the first time.”

But Marinkovic said he isn’t overly optimistic that such a visit will occur any time soon.

“It seems to me that the recent elections and upcoming obligations related to the transfer of power, the constitution of the new government and the time required for the introduction of new duties leave no room for organization of visits of that rank very soon,” he said. “But I would like to point out our interest and willingness to develop relations in this direction and to repeat the call for the exchange of the highest representatives of both countries as soon as possible.”