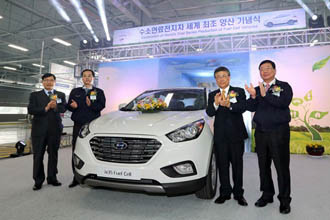 Hyundai Motor has become the first company in the world to begin commercially producing hydrogen fuel cell vehicles as the automaker focuses its sights on leading the market in the future.

At the firm’s plant in Ulsan yesterday, Hyundai Vice Chairman Kim Eok-jo, Ulsan Mayor Park Maeng-woo and 100 other officials celebrated the production of the hydrogen-powered Tucson ix. The automaker has established a separate line at the plant solely for mass-producing hydrogen fuel cell vehicles. Hyundai says the development is at least two years ahead of competitors like Mercedes-Benz, General Motors or Toyota.

The Tucson ix is equipped with a 100 kilowatt fuel cell and two hydrogen storage tanks. The nation’s largest automaker said the vehicle can drive up to 594 kilometers (369 miles) on a full charge and has a fuel efficiency equivalent to 27.8 kilometers per liter (65.4 miles per gallon) based on New European Driving Cycle standards.

The car was first introduced at the Geneva Motor Show in 2010. It received the prestigious FuturAuto award at the 2013 Brussels Motor Show last month.

Hyundai first started developing such vehicles in 1998 and unveiled its first one 2000. Last year it provided two hydrogen fuel cell buses to Incheon International Airport as terminal shuttles in a bid to raise awareness of the technology.

The company hopes to sell a thousand Tucson ixs by 2015. It has already signed a deal to deliver 15 vehicles to the City of Copenhagen and two to Skone, Sweden next month. The automaker is focusing on European government offices in its first sales push.

“The hydrogen fuel cell vehicle is perfectly pollution-free, as it only produces water,” the company said. “It is the ultimate vehicle of the future, surpassing both hybrids and electric vehicles.” But in order to further develop the industry, Hyundai said that the support of the government and energy companies is essential because there are not enough hydrogen charging stations. According to the company, there are only 13 currently in operation.

Germany is planning to build more than 100 stations by 2015, and the United States is also expected to build 68, mainly in California.

“Other companies are already at work setting up the infrastructure and supplying hydrogen fuel cell vehicles, and it’s urgent for Korea to come up with an organized plan to expand its infrastructure,” the automaker said.