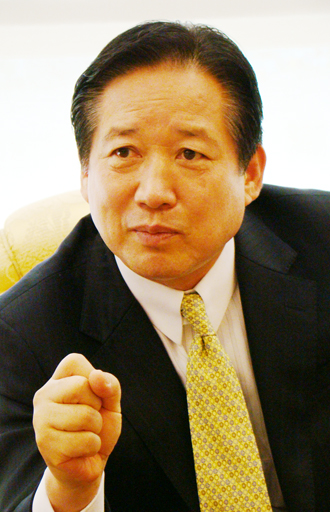 Pyongyang said if newly inaugurated South Korean President Park Geun-hye continues to take further economic sanctions against North Korea, it will “fight” against the move to the end, according to a South Korean businessman who frequently travels to the North.

Park Sang-kwon, CEO of the inter-Korean automaker Pyeonghwa Motors Corporation, said he met with a group of power elites in North Korea recently, while tensions are still high in the wake of the regime’s third-ever nuclear weapons test this month.

Park, 62, said in an exclusive interview with the JoongAng Ilbo on Tuesday that a day after the Feb. 12 nuclear test in North Korea, he took a trip to North Korea for six days, meeting with a series of high-ranking officials, such as Kim Ki-nam, secretary of the Central Committee of the Workers’ Party, and Choe Thae-bok, chairman of the Supreme People’s Assembly.

In the past nine years, Park said he has visited the reclusive country 212 times on inter-Korean business for South Korea’s Tongil Group, run by the Unification Church.

“After a nuclear weapons test, high-ranking North Korean officials showed an emotional reaction to the additional sanctions,” Park said. “They said, ‘If the Park Geun-hye government tries to kill us with sanctions, we will fight against it to the end.’?”

“They also said, ‘Don’t try to change us by drawing on the United States and China,’?” he said. Here are excerpts from the interview.

Banners hang on a building in Pyongyang with messages praising the third nuclear weapons test. Provided by Pyeonghwa Motors

Q. Your trip was apparently the first visit by a South Korean after the third nuclear weapons test. How did you feel when you were there?

A. I saw signs and banners hanging everywhere with messages praising the test. There was a festive atmosphere among people who were chanting “We are now a nuclear-armed state” or “Go and smash the United States!”

Some high-ranking officials seemed to be closely watching the aftermath and pondering how to react to further responses from the international community.

Even China, its closest ally, lashed out at the test. How is North Korea thinking about it?

I think North Korea feels discontent with China, who dissuaded it from the test, rather than with the United States, which has publicly denounced it. They complained Beijing’s position was a slap in the face because Beijing agreed upon the UN Security Council’s adoption of further sanctions following the December rocket launch and demanded Pyongyang abandon its third nuclear test plan.

Kim Jong-un appeared to protest against China for betraying the regime.

What kind of strategy do we have to improve inter-Korean relations from now on?

It’s nonsense for North Korea to have a nuclear weapon and want dialogue with the Park Geun-hye administration at the same time. Given the public sentiment of South Korea, we can’t resume talks with Kim Jong-un without a promise for denuclearization.

But there needs to be sanctions against a wrongful act, right?

I’m not siding with North Korea. But we need to take this as an opportunity to realize a more important thing, not just punishing the regime for something that has already occurred. The one who can solve this difficult problem through a dialogue with Kim Jong-un will be recognized by history. And I want Park Geun-hye to become the one.

Some critics say diplomacy with North Korea over the past 20 years has failed. How do you see it?

We have never seen a nuclear bomb from North Korea with our own eyes, so that’s why we don’t pay much attention to it. But because of the third nuclear test, now we have realized a nuclear weapon is something that could strangle us.

Some raise the possibility of an additional nuclear test after North Korea sees whether the UN members will take further sanctions or not. What do you think?

Conducting an additional test would screw everything up. The third test should be the last one. Denuclearization is the only way for the people of Korea to live.