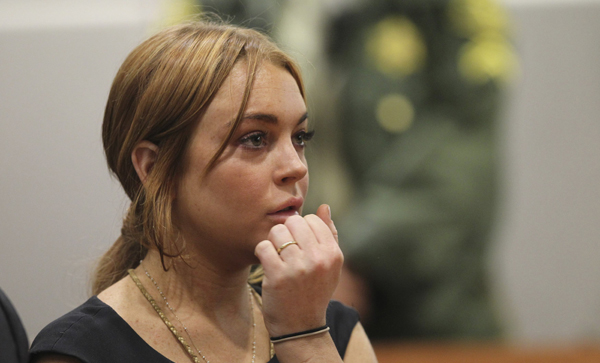 
LOS ANGELES - Troubled starlet Lindsay Lohan has had an “epiphany,” her attorney said on Wednesday, after almost six years of repeated trips to jail, rehab, counseling and courtrooms.

The “Mean Girls” actress has started a new round of psychotherapy and is looking at giving inspirational speeches to school kids and cheering up young girls in hospitals, Mark Heller told E! News.

Heller was speaking ahead of a pretrial hearing in Los Angeles on Friday where Lohan, 26, has pleaded not guilty to charges of reckless driving and lying to police when she said she was not driving a car that smashed into a truck in June 2012.

Lohan risks being sent to jail because she is still on probation after a string of legal woes that started with her 2007 arrest for drunken driving and cocaine possession. She is scheduled to stand trial on the June car crash charges on March 18.

Heller said Lohan was traumatized by the events of the past few years. “Being re-arrested and facing going back to jail caused her to have an epiphany. Sometimes the cumulative effect of everything in your life percolates and you have a realization and a clarity that things have to change,” he told the celebrity news Web site.

Heller said he was trying to get the car crash charges dismissed, or to slow down legal proceedings while Lohan makes another attempt to put her life back on track.

“The things we are exploring are going to a hospital setting and working with young girls and trying to cheer them up and encourage them to have confidence that their health will improve and have hope,” Heller told E! News.

“And going to schools and giving inspirational speeches and encouraging young people to make the right choices,” he added.

Lohan, who last appeared in the November TV movie “Liz & Dick” as screen legend Elizabeth Taylor, has been jailed or placed under house arrest for short periods several times since 2007, including three times in 2011. She has also spent at least five periods in rehab.