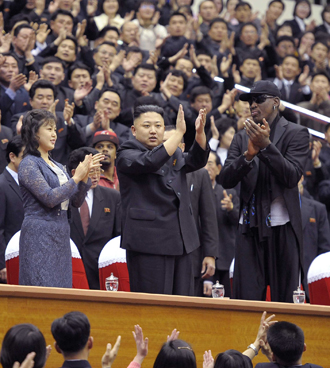 Ex-NBA star Dennis Rodman hung out with North Korea’s Kim Jong-un during his improbable journey to Pyongyang, watching the Harlem Globetrotters with the leader and later drinking and dining on sushi with him.

“You have a friend for life,” Rodman told Kim before a crowd of thousands Thursday at a gymnasium where they sat side by side, chatting as they watched players from North Korea and the United States face off in mixed teams, Alex Detrick, a spokesman for the New York-based VICE media company, told The Associated Press.

Rodman arrived in Pyongyang on Monday with three members of the professional Harlem Globetrotters basketball team, VICE correspondent Ryan Duffy and a production crew to shoot an episode on North Korea for a new weekly HBO series.

The unlikely encounter makes Rodman the most high-profile American to meet Kim since the young North Korean leader took power in December 2011, and takes place against a backdrop of tension between Washington and Pyongyang. North Korea conducted an underground nuclear test just two weeks ago, making clear the provocative act was a warning to the United States to drop what it considers a “hostile” policy toward the North.

Kim, a diehard basketball fan, told the former Detroit Pistons and Chicago Bulls star that he hoped the visit would break the ice between the United States and North Korea, VICE founder Shane Smith said.

Dressed in a blue Mao suit, Kim laughed and slapped his hands on the table before him during the game at the Jong Ju Yong Gymnasium as he sat nearly knee to knee with Rodman. Rodman, the man who once turned up in a wedding dress to promote his autobiography, wore a dark suit and dark sunglasses, but still had on his nose rings and other piercings. A can of Coca-Cola sat on the table before him in photos shared with AP by VICE.

“The crowd was really engaged, laughed at all of the Globetrotters antics, and actually got super loud toward the end as the score got close,” said Duffy, who suited up for a game in a blue uniform emblazoned with “United States of America.” “Most fun I’ve had in a while,” he said.

Kim and Rodman chatted in English, but Kim primarily spoke in Korean through a translator, Smith said after speaking to the VICE crew in Pyongyang.

“They bonded during the game,” Smith said by telephone from New York after speaking to the crew. “They were both enjoying the crazy shots, and the Harlem Globetrotters were putting on quite a show.”

The surprise visit by the flamboyant Hall of Famer known as “The Worm” makes him an unlikely ambassador at a time when state media says North Koreans are girding for battle with the U.S. Just last week, Kim guided troops in military exercises.

Before Thursday’s game, Rodman went up to Kim’s perch to offer his greetings.

“Warmly welcoming him, Kim Jong-un let him sit next to him,” the official Korean Central News Agency reported some 10 hours later.

The Americans presented Kim with a Harlem Globetrotters uniform. For the halftime entertainment, taekwondo athletes showed off some moves and a “women’s brass band presented glamorous rhythmic formations,” KCNA said.

Thursday’s game ended in a 110-110 tie, with two Americans playing on each team alongside North Koreans. At a lavish dinner later, the leader plied the group with food and drinks and round after round of toasts were made.

“Dinner was an epic feast. Felt like about 10 courses in total,” Duffy said in an e-mail to AP. “I’d say the winners were the smoked turkey and sushi, though we had the Pyongyang cold noodles earlier in the trip, and that’s been the runaway favorite so far.”

Duffy said he invited Kim to visit the United States, a proposal met with hearty laughter from the North Korean leader. Kim said he hoped sports exchange would promote “mutual understanding between the people of the two countries,” KCNA said.

Rodman’s trip is the second attention-grabbing U.S. visit this year to North Korea. Google’s executive chairman, Eric Schmidt, made a four-day trip in January to Pyongyang, but did not meet the North Korean leader.

In Washington, the State Department refused comment on Rodman’s visit or his meeting with Kim. “Private, individual Americans are welcome to take actions they see fit,” spokesman Patrick Ventrell said.