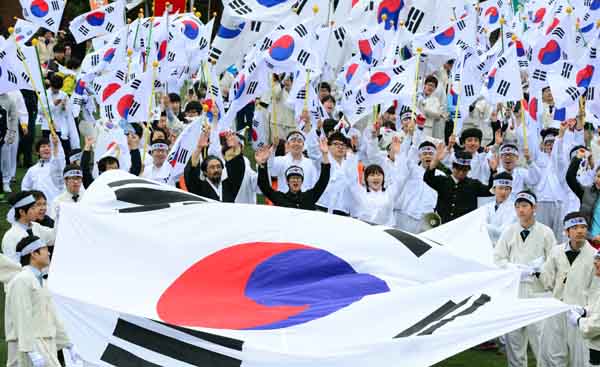 Thousands of Busan residents shout “Republic of Korea! Hurrah!” - a cry that resonated throughout the nation yesterday in celebration of the 94th anniversary of the March 1 Independence Movement. The Busan Metropolitan Government hosted the celebration commemorating young Korean activists’ uprising against Japanese colonial rule in 1919. [NEWSIS]


As the nation celebrated Independence Movement Day yesterday, President Park Geun-hye urged Tokyo to “behave in a responsible manner” and hold a “correct” understanding of history in order to advance strained bilateral relations.

“It is incumbent on Japan to have a correct understanding of history and take on an attitude of responsibility in order to partner with us in playing a leading role in East Asia in the 21st century,” Park stated in her address marking the 94th anniversary of Korean activists’ uprising against Japanese rule.

That is the prerequisite “to building rock-solid trust,” reconciliation and cooperation between the two countries, Park said, addressing thousands at the Sejong Center for the Performing Arts in Jongno District, central Seoul.

The March 1 Movement in 1919 remains a touchstone of Korean nationalism as the day when activists declared Korea’s independence and triggered large-scale demonstrations against Japanese colonial rule (1910-1945). 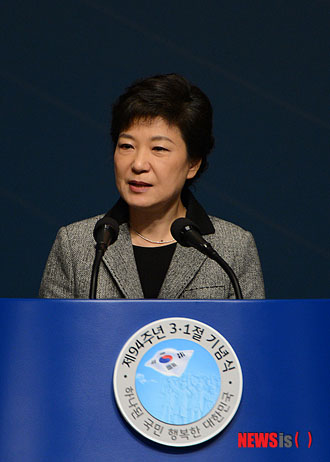 The uprising was met with the arrest and brutal massacre of activists by the imperial Japanese police and army.

“During that time, the Korean people laid their own foundation for self-reliant independence while under inhospitable colonial rule,” said Park, paying homage to “the noble sacrifices and devotion of our fallen patriotic forefathers.”

“It is high time for the political leaders of this generation to demonstrate their determination and courage,” Park said.

The president also conveyed her message about recognizing “correct history” to Japan’s Deputy Prime Minister Taro Aso at the Blue House after her inauguration ceremony on Monday.

The two countries’ claims to the territory remain a continued point of contention between the neighbors along with Seoul’s request for a formal apology from Tokyo for its historical misdeeds, including forcing Korean women into sexual slavery during colonial rule.

While there were hopes that administration changes in both countries could patch up the soured relations, Tokyo further aggravated Korea by sending a vice-ministerial government official to the annual Takeshima Day celebration in Shimane Prefecture for the first time on Feb. 22.

A record number of Japanese lawmakers reportedly attended the ceremony that came just ahead of Park’s inauguration ceremony.

In her speech, Park did not specifically refer to the controversies when appealing to Japan to “change unreservedly” in order for the “two nations to heal the wounds of the past as soon as possible and march together toward a future of shared progress.”

In response, Japanese Foreign Minister Fumio Kishida said at a press briefing in Tokyo yesterday, “While difficult problems exist for both countries, the Japanese government wants to advance a future-oriented relationship as both nations begin new administrations.”

He added, “Deputy Prime Minister Taro Aso conveyed to President Park [in their bilateral talks held on Monday at the Blue House] that there has to be step-by-step efforts to build a future-oriented relationship, and it is our understanding that both parties were in accordance.”

Local merchants including shop and restaurant owners were less congenial and vowed to directly address the Takeshima Day issue.

The Save Local Stores Alliance declared on Monday that its six million members would not sell Japanese products, including food, cigarettes, cars and clothing, beginning on Independence Movement Day.

It reiterated the stance yesterday in the midst of the Independence Movement Day events.

“We request the government take strong action against Japan’s brutalities,” the alliance said at a press briefing in Jongno District.

“Since Japan has yet to apologize for its past actions and end its claim to the Dokdo islets, we will commence a boycott of Japanese goods starting today, March 1 Independence Movement Day.”

Meanwhile, as President Park kicked off celebrations, cities across the nation focused on their own activities and events.

In Seoul, more than 10,000 people gathered at Seodaemun Prison in the central part of the city to cry out “Republic of Korea! Hurrah!”

During the colonial period, many independence fighters were detained there by Japanese authorities.

In Cheonan, South Chungcheong, there was a touch-lit rally at the Independence Hall of Korea. Daegu held cultural performances in its Central District, and there was a bell-ringing ceremony in Dongnae District, north-central Busan.