Just another bump in the road

Just another bump in the road 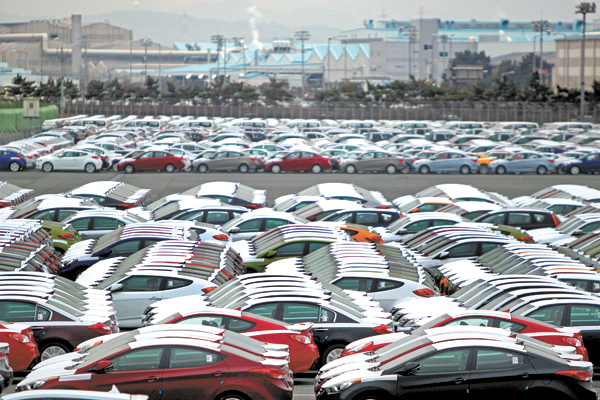 Hyundai Motor’s plan to enhance its brand value has hit a bump in the road, with the automaker receiving poor grades in U.S. consumer surveys.

However, in overall dependability, which is determined by the level of problems experienced per 100 vehicles, Hyundai was 22nd among 32 brands, while its sister company Kia was 21st. In the 2012 Vehicle Dependability Study, Hyundai was 10th.

An official from the company attributed the lower ranking to the Genesis coupe’s problems with air conditioning and smartphone connectivity, but industry observers say that shows Hyundai needs to work harder on its premium models.

Hyundai Motor Group Chairman Chung Mong-koo stressed in his New Year’s message that the company will focus on trying to enhance brand value and improve quality.

The nation’s largest automaker, which sold 4.4 million vehicles worldwide last year, showed its ambition at the 2013 North American International Auto Show in Detroit in January when it unveiled the HCD-14 Genesis concept car.

The company said it hopes to build its premium brand image globally with its Genesis and Equus luxury sedans. It also appointed German designer Peter Schryer to oversee the design of both Hyundai and Kia as a part of its plan.

“Hyundai’s Genesis and Equus models are now recognized as serious contenders in the global luxury market,” said Im Tak-uk, head of Hyundai Motor’s International Operations Division, at the auto show. “Our focus going forward is to strive for brand innovation based on quality.”

Its strategy seemed to be successful, as sales of luxury sedans hit a monthly high in the United States in January.

Hyundai Motor sold 1,544 Genesis sedans and 928 coupes. It sold 797 of its flagship sedans, the Equus and 253 Grandeur sedans. Luxury sedans accounted for 8.1 percent of the 43,713 Hyundais sold in the United States in January.

Since the Genesis was introduced in the United States in 2008, according to Hyundai, the share of Hyundai buyers with household incomes above $100,000 has increased by 25 percent.

However, the automaker was hit by unwelcome news from the U.S. last month.

Hyundai last Thursday announced that it has begun recalling an additional 6,100 Velosters, a hatchback sold in the United States, because of the possibility its panorama sunroofs will shatter. This was just two months after the automaker’s first recall of about 13,500 Velosters with same problem.

But what’s worrying Hyundai is it has received poor ratings on brand evaluation and durability tests conducted by market research groups in the United States, the world’s second-largest auto market behind China.

Meanwhile, Hyundai was on a slippery slope again in the U.S. magazine Consumer Reports’ 2013 Top Picks. Although the automaker has managed to put its Elantra, known here as the Avante, in their best budget car category, Hyundai’s overall brand ranking was tied for 14th with Cadillac among 26 brands, down three places from last year. Kia was ranked 11th.

Adding to the pressure, Japanese automakers swept the top eight spots in brand rankings. In addition, the Japanese have also dominated the top car picks, taking seven of 10 awards.

In addition to the budget car category, the two other top picks category the Japanese didn’t claim were best luxury car and sports sedan, which were won by the Audi A6 and BMW 328i, respectively.

Industry insiders say the result is proof of the recovery of Japanese automakers, which were hit by massive recalls and production damage caused by the tsunami in 2011. They have also received a boost from the weakening yen.

“Our philosophy of enhancing the brand value and pursuing great product quality has not changed,” an official from Hyundai said. “There are lots of difficult situations out there, but we are still trying to improve and learn so we can get to the top. I hope consumers watch us carefully.”