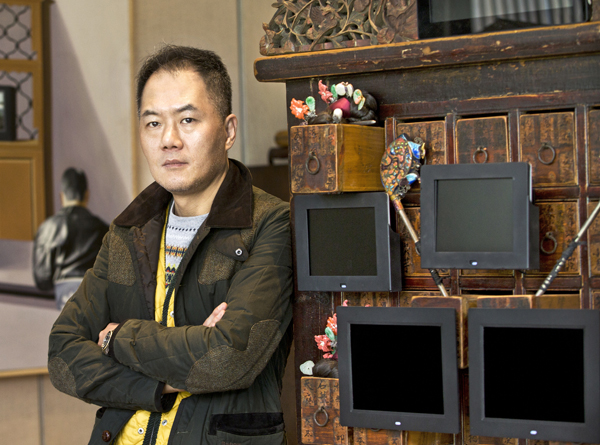 Kim Young-seok poses in his shop in front of an video installation work meant to promote hanbok and his work. It uses a traditional Korean chest and ornaments along with flat-screen panels. By Park Sang-moon

A brief look around the hanbok shop of Kim Young-seok is enough to tell that he is no ordinary tailor. It’s full of contemporary art, high-tech gadgets, mysterious antiquities and stylish furniture in addition to different fabrics, decorative pieces and sewing tools.

It’s clearly a treasure trove for fashionistas and history buffs who have been paying more attention to Kim since President Park Geun-hye wore his designs on Inauguration Day last week.

He also designed the huge lucky bag (called bokjumeoni in Korean) set up in Gwanghwamun Square on that day as well as the 365 tiny bags that were inside. Each of the smaller bags contained a message from a Korean citizen for the new president.

Kim is no stranger to high-profile clients. He designed hanbok for celebrities like former first lady Kim Yoon-ok, beloved actress of the ’90s Sim Eun-ha and Korea’s star ballerina Kang Sue-jin while also showcasing his works at major global events like Group of 20 Summit in 2010.

As a lifelong collector of artwork and antiques, he also strives to take part in art projects that cross genres. They include the “Deoksugung Project” in 2012, for which contemporary artists installed their work in Deoksu Palace, central Seoul; “Time Travel through Hanok,” also held last year, in which he and Japanese light artist Tatsuo Miyajima transformed a hanok (traditional Korean house) in Seoul; and “Han by Swarovski Elements” (2011) for which hanbok designers incorporated Swarovski’s signature crystals into their designs.

What’s particularly impressive is that the 50-year-old, who studied animal husbandry in Korea and event planning in Japan, only started designing hanbok when he was 36 years old.

In his early 30s, he was working in the event planning business and while his friends and colleagues learned to play golf, he learned needlework as a hobby from Koo Hye-ja, a traditional needlework master designated as an Important Intangible Cultural Heritage. He wandered around antique shops in Hwanghak-dong, central Seoul, to collect artwork and antiques.

He fell in love with Samcheong-dong, home to a cluster of exquisite hanok, and eventually opened a little hanbok shop in the area. One by one, people took note of his work for being modern and creative yet graceful and traditional. In 2007, he was offered space in the arcade of Hotel Shilla in central Seoul.

The Korea JoongAng Daily sat down with Kim, two days after the presidential inaugural ceremony, at his shop to discuss his latest work and other career developments. 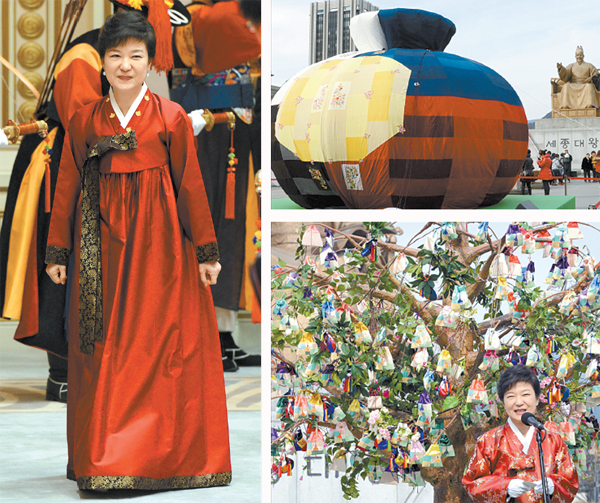 Q. Let’s start with the hanbok President Park Geun-hye wore. How did you feel watching the inauguration ceremony? What was most important in designing the pieces, and were there any special requests from Park?

A. I was overwhelmed. I only realized that she wore my work when I saw her in the media. I made the pieces for her [at the request of her administration], but there was always the potential [that she might not wear them]. I was never 100 percent sure.

Although Park Geun-hye is Korea’s first female president and many people are interested in her fashion, I wanted to eliminate the element and make a piece that was suitable for the title. In other words, I wanted to create hanbok that suits a “president,” not necessarily a “lady.”

There weren’t any special requests [from Park]. I just knew that she likes things modest and humble and not too flamboyant. I also felt that it wouldn’t be appropriate to make a wildly expensive and luxurious piece.

[The hanbok Park wore in the Gwanghwamun Square, the durumagi, or traditional overcoat, cost 1 million won ($915.29), while the two-piece hanbok inside cost 1.3 million won.]

I heard you also planned the lucky bag event in Gwanghwamun Square. What was the preparation like?

Time was the biggest concern, so we decided to just start making the lucky bags even before we got final approval from the administration. Even so, we had less than two months to make the lucky bags, both the giant and smaller ones. The Lunar New Year is usually the peak time for the hanbok business, but we spent the holiday making the bags.

We had fabric of the five obang colors in our shop and used them. [Obang means five directions. The five directions are center, north, south, east and west, and five colors are assigned to these directions: yellow (center), blue (east), white (west), red (south) and black (north).]

The large lucky bag installation was something that I had never done before, so it was really trial and error. I wanted it to be graceful, so I used silk initially, but I had to change fabrics because silk wrinkled too much. So I pretty much made the lucky bag installation twice. By far, it is the largest piece of art I have ever worked on. [It measured five meters in diameter.] 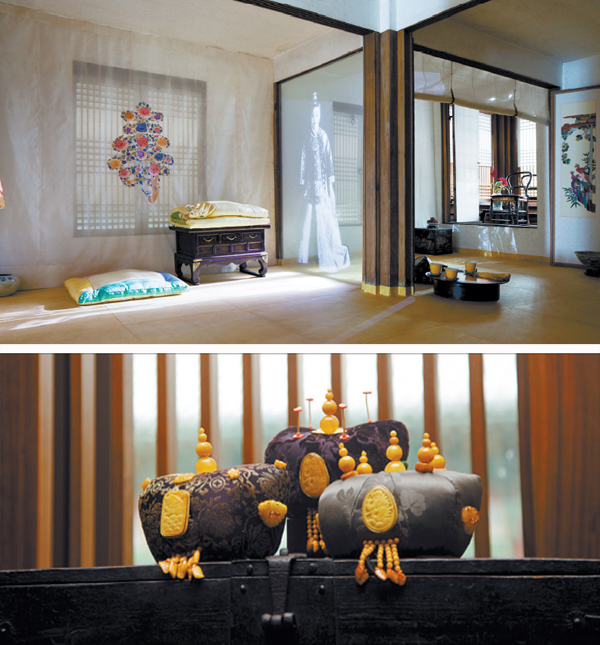 Top: Kim’s work for the “Deoksugung Project” using the furniture, crafts and cloth in his collection. Right: Kim’s work at the “DNA × Kabbala” exhibition, which consists of 100 pieces of jokduri (bride’s headpiece for a traditional Korean wedding) Provided by each museums

Park’s hanbok incorporated many historical elements. For instance, you used the pattern of palbo [eight treasures] from ancient times. [The treasures include pearl, a coin, a mirror and others.] Where did you learn about this history, and how did you become interested in it?

Ever since I was young, I was fascinated by antiques, ancient art and traditional crafts. They were like toys to me.

When I was attending elementary school, I so wanted to buy a traditional water dropper (used for calligraphy). Back then, I lived in the Seosomun area, and I walked to Insa-dong by myself to buy one. It wasn’t like I needed it for calligraphy, but just because it was so beautiful.

I also climbed over the walls of palaces in downtown Seoul and played in the palace grounds with friends. Sometimes at home, I would open my grandmother’s old chests and admired the beautiful, traditional fabric.

History was all around me and in my everyday life. So you could say that’s how I learned so much about history. I do not keep count of my collection, but the pieces are the very inspiration for the work I have been doing and will do in the future.

Other than Park Geun-hye’s hanbok and the lucky bags, what have you been working on?

I designed a piece for the “DNA × Kabbala” exhibition that began at the Daegu Art Museum on Feb. 26. The work consists of 100 pieces of jokduri (bride’s headpiece for a traditional Korean wedding), titled “100 Interpretations on Jokduri.”

Jokduri is like the tiara in the Western world, and it is the most important decoration for a bride. While recreating the traditional headdress, I have also used precious stones like diamond and ruby.

Some people may raise their eyebrows at the idea of traditional jokduri positioned together with exotic jewelry like diamonds and rubies, but that’s the problem with Koreans’ views on history and tradition.

It’s not right to define our history and tradition as something and put a limit on our creativity and skills. We shouldn’t forget that even the Silla Dynasty (57 BC-AD 935) used glass for their crafts as they learned to make it via trade with the West.