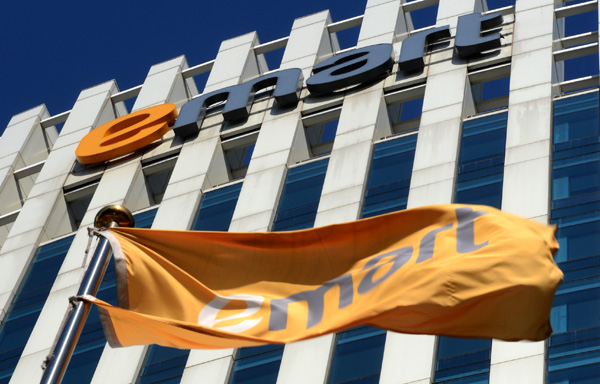 Police dispatched by the Ministry of Employment and Labor raided headquarters of E-Mart in eastern Seoul and other branches three times. E-Mart said yesterday it will convert 10,000 contract workers into regular employees. [NEWSIS]

E-Mart, the discount arm of the retail giant Shinsegae Group, announced yesterday it will convert 10,000 people working on displays at its 146 branches to regular employees as of April 1.

Currently, they are irregular workers hired by E-Mart subcontractors.

The move comes after the Ministry of Employment and Labor last month said E-Mart was in violation of labor law and ordered the retailer to hire the workers directly or face a fine of 19.7 billion won ($18 million).

In an investigation of 23 branches earlier this year, the ministry found that nearly 2,000 people working on displays were not regular employees of E-Mart.

Under the law, people working on displays or who have direct contact with customers, such as cashiers, must be regular employees, not dispatched from subcontractors.

E-Mart is the first retailer in the country found to have illegal practices in its hiring system. Previously, non-service industries such as GM Korea were deemed guilty of such practices.

According to Kim Gyeong-hyeop, a United Democratic Party lawmaker, there are roughly 13,000 employees at other major retailers working in violation of labor law, more than 6,400 of them at Lotte Mart and 1,600 at Homeplus.

The lawmaker has been urging the government to take stern measures and order the retailers to convert such workers to regular employees.

“[The government] in 2008 and 2010 knew about the situation involving subcontracted employees in the retail industry,” said Kim. “The investigation should be expanded to include other retailers.”

In a statement yesterday, E-Mart said it did not violate the labor law intentionally, hinting that unfavorable economic conditions was the reason for postponing its decision to convert the workers.

E-Mart said it had been considering hiring the subcontractor workers as regular employees since last year but was put off by the cost of doing so.

E-Mart said the decision will likely mean a 27 percent pay raise for the former dispatched employees, as they will receive the same compensation, including bonuses, as regular workers.

The retailer also stressed that it converted 5,000 part-time cashiers to regular workers in 2007.

“Converting employees to regular workers was a decision made to improve the quality of hiring by creating good jobs while at the same time such [change] was possible as the existing employees had the will to pursue shared growth,” said Hur Inn-chul, E-Mart CEO. “We plan to enhance our social responsibility through ongoing investment and expanding hiring.”