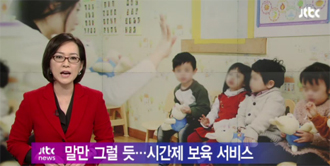 At the beginning of the year, the Seoul Metropolitan Government said it provided dozens of day care centers that can take a child for up to four hours between 9 a.m. and 6 p.m. as a measure to help those parents who need a place to send their kids in an emergency.

A 34-year-old resident of Jung District, central Seoul, surnamed Kim was embarrassed when she applied for the program.

Kim needed to participate in a parents’ day event that was held in her 9-year-old daughter’s school.

She immediately opened the city government’s Web site that detailed the child-care program (iseoul.seoul.go.kr) and dialed some numbers that were on the site as she needed someone to take care of her 3-year-old daughter.

But hopes for finding a decent place to send her daughter were dashed.

Every day-care center she called gave the same response, “We do not run that program.”

Angry, Kim immediately called the city government to complain, but officials there had a similar answer to the day care center.

All they said was, “Call a local district office.”

“I remember the city government advertising the program through the media and on the Internet, but it is obvious that they do not even check whether the program is operating well,” Kim complained.

She wasn’t able to attend the parents’ day event.

The municipal government said they have provided a total of 62 day care centers in Seoul.

When the JoongAng Ilbo called every center on the city government’s Web site recently, only six of them said they could take care of a child right away. Nineteen of them said, “We do not offer such program.”

Some of the centers even demanded additional fees.

“Only a limited number of parents apply for the program,” an official at a day care center told the JoongAng Ilbo.

“And we only receive 6,800 won in subsidies from the city government per hour of service. It doesn’t help us much in managing our facility, so we already told local district offices that we will not run the program.”

The program description that the city government provided on the Web site calls for prior planning, but most parents need this service when something happens at the last minute.

The Web site reads, “Make a reservation about three days before you want to use a facility.”