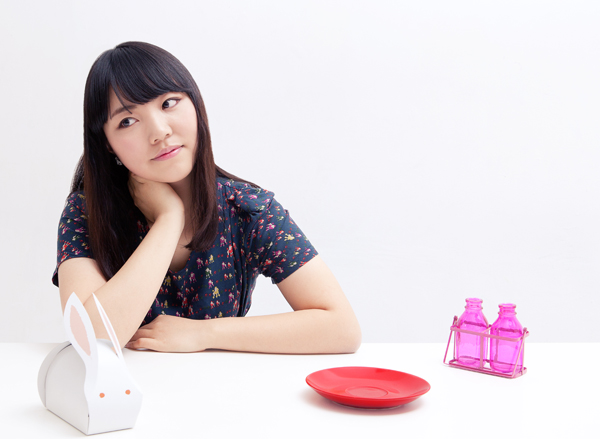 Jung Da-jung is the creator of “Yummy! Unlicensed Cooking,” an online cartoon, or Webtoon, that shares unconventional recipes and cooking techniques.

Jung Da-jung doesn’t waste time with proper measurement tools or run-of-the-mill kitchen utensils in her cooking Web toon. Instead, she uses what’s at hand - like a rice cooker to bake a cake or butter cream from a ready-made bun.

She doesn’t mince her words, either. When a tiny portion of soy sauce is needed, Jung tells her readers they need an amount equal to the “pheromones of one ant.”

It’s her spunk in presentation and resourcefulness in the kitchen that draw devoted readers to “Yummy! Unlicensed Cooking,” which features Jung’s cartoon persona, on Naver every Saturday.

When Jung first began uploading photos of her meals to a personal blog with witty captions in the fall of 2011, she was a self-described “good-for-nothing loser.” Before long, though, her relatable attitude caught the attention of Naver Web toon, the country’s main producer of online, serial cartoons.

Many of her creations are far from beautiful and taste is not guaranteed, but the honest way Jung stumbles through the kitchen seems just the ticket to success. 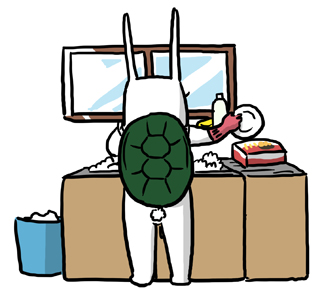 Her frequent use of slang and the format of the Web toon itself add to the perception that she could just be the girl next door toiling away at dinner.

She takes photos with her portable digital camera, some of them blurry, and spices them up with her wit.

First serialized in December 2011, Internet users praise her Web toon for being hilarious yet creative and well-rounded.

She recently appeared in a television commercial for Naver and now works with high-profile clients like Samsung Electronics on advertising. Jung is even the target of an anti-fan group online, perhaps the ultimate mark of success. 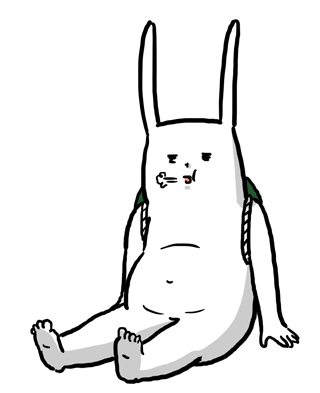 Jung Da-jung is represented by a bunny in her Webtoon.

Jung’s rise to fame came as a bit of a shock to the cook herself. Though she followed a path typical of many Korean young people early on, Jung never fit in and seemed destined for life without an exclusive college education or high-profile job.

“I attended a foreign language high school, graduated from another high school in the States, did a lot of volunteer work and even won numerous awards at English writing competitions,” Jung told the Korea JoongAng Daily in a recent interview. “I was a misfit. Nobody wanted to associate with me and even my family and friends distanced themselves.”

Special admission to a top foreign-language high school would be celebrated in most families, but it was nothing but a burden for Jung despite the recognition she earned for her English skills.

“I was talented in picking up foreign languages, but I couldn’t excel in all subjects like other kids did. How could it be possible? I ended up playing mobile phone games during class and didn’t even talk to classmates or teachers. We had class time from 6 a.m. to midnight Monday to Saturday.”

So Jung looked for an escape from the oppressive routine.

She went abroad and eventually graduated from a high school in Michigan, but still couldn’t catch a break. Upon returning home, she was rejected from every university to which she applied.

That’s when she turned to cooking. With money earned from private tutoring, she bought ingredients and snuck into the kitchen when her mother was away from home. She told her parents
she was preparing to attend college but instead stayed cooped up in her room with a laptop doing what liked most: posting her work online.

“There were people who uploaded photos of what they had eaten for the day on the Web and I wanted to be part of the community but made up my mind to create my posts in funnier ways,” Jung explained.

Even when she was an obscure blogger, each episode of her cooking adventures would attract more than 900 comments.

By the time she serialized seven episodes on her own, she received the fateful e-mail from Naver that would set her on an unlikely path to stardom.

Jung said she thinks that viewers are attracted to her modest attitude and willingness to fail - qualities she may have mastered in her misfit youth.

1.Pour hot cake batter into a rice cooker. 2. It is important to keep the temperature cool when whipping.That’s why people often whip by putting a bowl on a layer of ice cubes. 3.But there’s no ice left! 4. Today’s low is 10 degrees below zero and it seems like perfect weather to whip in the hallway.5. That’s what they say! 6. I’m cold. It’s damn so cold. 7. But I keep whipping. It’s not working, though. Screen capture from “Yummy! Unlicensed Cooking”

“Many used to take pleasure in seeing me spoiling my dishes in the beginning,” she said. “But it seems like they get pleasure and courage from a person like me, too.”

In the last few years, Jung’s cooking has improved as her fan base grew.

“My food has become tastier. I was insecure after my Web toon gained popularity because it often shows my mistakes. So I thought to myself ‘Do I have to change my concept?’?”

The success hasn’t come without a price. Jung said she now often works from 9 a.m. to 2 a.m. and has pangs of guilt about her ability to succeed over others.

“I have felt guilty since my debut because I never learned how to draw and there are other Webtoonists whose skills and techniques are far better than mine,” she noted.

But she’s certainly come a long way from her days as a struggling high school student.

“My conclusion is that ‘unlicensed’ doesn’t always mean failure. Even if you get unlicensed plastic surgery, it can be done well! So I decided to keep going by challenging myself with different dishes,” she said.

Naver promotes “Yummy! Unlicensed Cooking” with the tag line “She can do it! Why not you?” as if reaching out to those who yearn for their own success stories as Jung once did.

Yet the Webtoonist isn’t quite so optimistic about others’ chances in a society where a whopping 80 percent of people have college degrees and rarely deviate from the cookie-cutter path to success.

“I had a chance to talk to a group of college students a few months ago and I told them to follow their hearts. .?.?. But now I regret my words. I think I was irresponsible,” she said.

“One thing I know for sure is I was really lucky. If people could always pursue their dreams, that would be ideal, but now that’s not always the right path - giving up on all the things you already have. In reality, we might be better off doing more routine jobs and being paid by a company on a monthly basis instead of staggering between reality and ideals.”