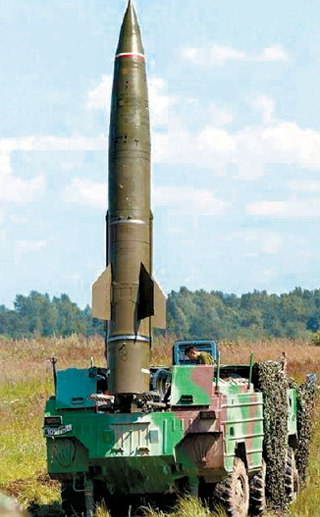 Ahead of joint war games between South Korea and the United States starting Monday, Pyongyang said it will “exercise the right to a nuclear pre-emptive strike” if the drills take place.

It also reiterated a threat to scrap the armistice agreement that halted the Korean War, which would put the entire Korean Peninsula at risk of a second civil war.

“As the United States tries to light the fuse of a nuclear war, our revolutionary forces will exercise the right of a pre-emptive nuclear strike on the bases of the invaders in order to safeguard the nation’s vital interests,” said a statement by the North’s Foreign Ministry through the official Korean Central News Agency. “Starting from March 11, when the U.S. exercises for a nuclear war begin, the Choson armistice agreement will be entirely nullified, as we have declared, and our revolutionary forces will be totally free of the agreement and can take a self-defense military action at any time against any target.”

On Wednesday, the regime threatened to turn Seoul and Washington into “seas of fire” through a “precise nuclear strike.” A day prior, on Tuesday, one of its generals said on television that it could walk away from the 1953 armistice agreement that halted the Korean War.

In response Wednesday, the operations director of the Joint Chiefs of Staff of South Korea warned that it would retaliate against the source of any attacks and also the leaders who ordered them.

Pyongyang has also extended the range of one of its short-range missiles to enable it to strike U.S. forces in Pyeongtaek, Gyeonggi, a high-ranking government official told the JoongAng Ilbo yesterday.

“Based on our analysis of the KN-02 missile that Pyongyang launched during live-fire exercises last month, we found its range reaches up to 150 or 160 kilometers [99 miles],” the official said. “We assume they boosted the force of the missile’s engine to extend the range.”

With the extended range, if North Korea launches it from a pad near the border, such as the city of Kaesong, the missile could reach Pyeongtaek, south of Seoul, as well as Daejeon.

Currently Camp Humphreys is in Pyeongtaek, but the U.S. garrison in Yongsan, central Seoul, will move there in 2019.

The KN-02 missile can also be mounted with a payload, the South’s military said.

“The KN-02 missile uses solid fuel and it can blast off within five or ten minutes if carried on a mobile rocket launcher,” the official said. “It is a threatening weapon because of its striking accuracy.”

The North Korean military showed the KN-02 missiles for the first time at a military parade on April 25, 2007, the anniversary of the birth of its military.

According to South Korea’s military, the KN-02 is manufactured by the North Korean military based on Russia’s SS-21 Scarab missiles.

“Since Pyongyang showed the missile in 2007, it has frequently test-fired it near Wonsan, an eastern coastal city, or Hwajin, on the Yellow Sea,” the official said. “Up until recently, it has reportedly tested the missile’s engine at an institute in Samum-dong, Pyongyang.”

North Korea allegedly invited military officials from Iran and Syria to witness live-fire tests of about 10 KN-02 missiles in 2012.

Several officials in the South’s military said they were tipped off that the North has a plan to conduct live-fire exercises between Feb. 10 and 11.

On Jan. 27, 2010, two months before the warship Cheonan’s sinking, Pyongyang carried out the so-called “Time On Target” exercises, in which a variety of artillery weapons barraged a specific target.

Starting from Monday, Korea-U.S. forces will start the annual joint military exercises called Key Resolve and the Foal Eagle joint exercise began March 1. During the drills, Pyongyang will reportedly restrict its vessels from sailing in the Yellow Sea and jet planes from flying over the East Sea.