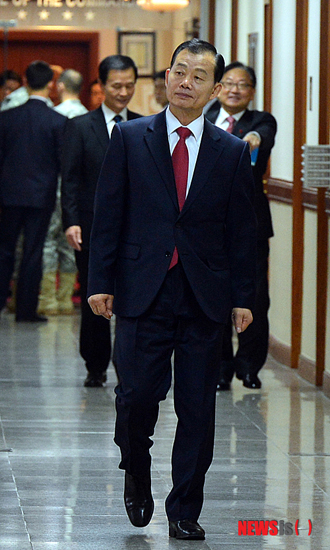 On the eve of his confirmation hearing, the defense minister nominee of the Park Geun-hye administration faced another round of criticism over his sense of national security, as local media reported on his trip to a hot spring in Japan the day after North Korea’s Yeonpyeong Island shelling.

The JoongAng Ilbo reported yesterday morning that Kim Byung-kwan and his wife left for Japan the day after the North’s deadly attack on the South’s northwestern island on Nov. 23, 2010. At the time, Kim was not an active member of the military.

He retired from the post of the deputy commander of the Korea-U.S. Combined Forces Command at the end of March 2008.

The report quoted an immigration report from the Ministry and Justice obtained by Representative Ahn Gyu-back of the Democratic United Party. According to the record, Kim left for Japan on Nov. 24 and returned on Nov. 29, 2010.

While Kim was not an active military leader at the time of the Yeonpyeong Island shelling, he was the chief defense policy advisor for the Grand National Party, the predecessor of the ruling Saenuri Party. The appointment was made on Nov. 8, 2010.

“I was a civilian at the time,” Kim told the JoongAng Ilbo. “It was a trip that was already arranged a long time ago to go with my friends.”

Kim already faced criticism from the public for having played golf at military country clubs in the aftermath of the Cheonan’s sinking by North Korea.

The main opposition DUP yesterday criticized Kim for his lack of a sense of national security and pressured him to give up the nomination.

“This is yet another case that shows he is unfit for the job,” said Kim Jeong-hyeon, deputy spokesman of the DUP.

With Kim’s confirmation hearing scheduled for today, the National Assembly will wrap up its schedule on most of Park’s minister nominees.