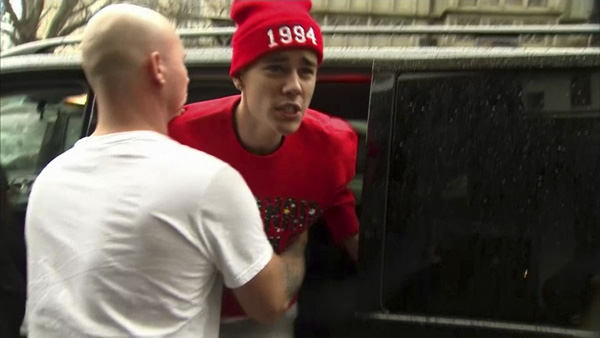 LONDON - Pop star Justin Bieber wrapped up his final London show without a hitch on Friday after a week riddled with paparazzi run-ins and a trip to the hospital.

Bieber, 19, sang and danced his way through his fourth night at London’s O2 Arena on the European leg of his “Believe” world tour, back to his normal self after collapsing on stage from shortness of breath on Thursday.

The Canadian-born singer was treated by doctors backstage and given oxygen on the third night of his London shows. He returned to the stage after a 20-minute break and completed his set but was later taken to hospital as a precaution, the singer’s representatives told Reuters.

The singer also had an altercation with a U.K. photographer on Friday, caught on camera by Reuters, which showed Bieber get out of a van, try to move toward the unnamed photographer and threaten him using several swear words. He was reacting to the man’s foul-mouthed criticism of him, and his security team after the singer appeared to have made contact with the photographer as they moved toward the vehicle.

The bouncers held Bieber back, but the incident is likely to create more negative headlines for one of the world’s biggest pop stars.

Bieber has had several run-ins with paparazzi in recent years and took to Twitter this week to criticize the media for what he called fabricated stories about him during his stay in London, where he is performing his sold-out tour.

After the latest altercation, he returned to the micro-blogging site, where he has more than 35 million followers. He wrote, “Ahhhhh! Rough morning. Trying to feel better for this show tonight but let the paps get the best of me .?.?.?.

“Sometimes when people r shoving cameras in your face all day and yelling the worst thing possible at u .?.?. well I’m human. Rough week.”

Thursday’s onstage collapse was not the first for Bieber. He suffered a concussion during a concert in Paris last June after falling into a glass wall. Bieber’s illness came just days after he angered many fans by appearing for his first night at the O2 nearly two hours later than the advertised time.

The singer blamed technical issues for the delay and said he was only 40 minutes behind schedule, but the media jumped on the story and the popular Sun tabloid referred to him in a March 7 story as “Pop brat Justin.”