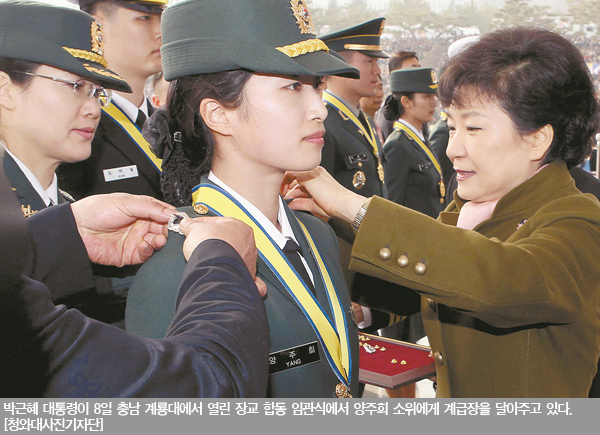 But Yang’s chances were rather slim as she was on the wait list.

The desperate cadet-wannabe finally received an admission call on the day the semester started, enrolling in the academy at the bottom of her class.

Four years later, Yang was not only commissioned as Second Lieutenant of the military academy, which first opened its door for female cadets in 1998, but was also awarded the President’s Award by President Park Geun-hye yesterday during the Joint Commissioning Ceremony, which was held for 5,780 newly commissioned officers of the Korean Army, Navy, Air Force and Marine Corps in Gyeryong military headquarters, South Chungcheong.

The 22-year-old official climbed up from the bottom to graduate at the top of her class of 204 cadets and overcame the gender barrier embedded in the male-dominated military culture.

“It’s my honor to be awarded by the president to represent the Military Academy’s class of 2013,” said Yang yesterday during the ceremony preparation at the Gyeryong headquarters.

Yang recalled that her love for the military academy began when she was in high school. “It was in March during my high school senior year when I saw a group of academy cadets visiting my school on an admission promotion assignment. After watching them act in such a dignified way with honor and pride, I immediately fell in love with life as a military officer.”

As the media has been focusing on Yang because of her gender, she says one of the most challenging things she encountered during her cadet years was the public’s perception of female military officers. “Many people would stare at me when I wore my uniform on the street,” says the officer. “I also heard many worry about how a woman can have a career as a military officer. I want people to treat and think of female cadets in the same way they do male military men.” 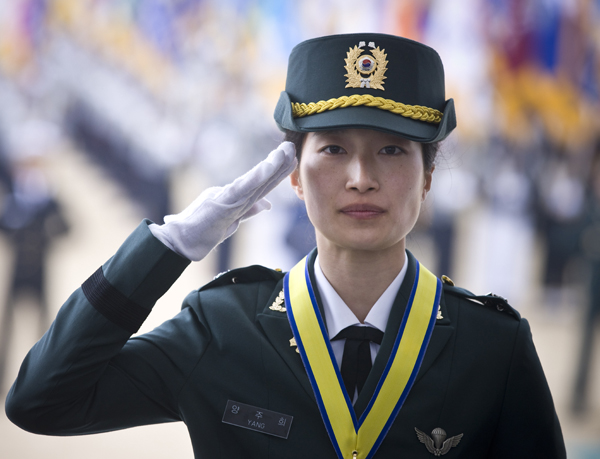 On advice for wannabe cadets among female students, Yang says they “shouldn’t ask for favors” when leading a life as a military officer. “I want my junior female cadets or high school students who wish to study at the military academy to keep in mind that there should be no distinction between the two genders.”

As if to signify the rising power of women in the country, the top of the class for nearly 4,500 Reserve Officers’ Training cadets came from Sookmyung Women’s University, which launched the ROTC program for the first time among female colleges in the country in 2011.

“It was a sense of privilege that only a select few could be commissioned officers that drove me to enlist as a ROTC cadet [two years ago],” said Second Lieutenant Park Ki-eun, who rose to the top of her fellow ROTC cadets.

Second Lieutenant Park was also awarded the President’s Award by the recently inaugurated president on the podium. “It is my great honor to be given the award. I will always act accordingly to the pride and honor I have received today throughout my military career.”