Alan Bradley on young sleuths and the TV series

Alan Bradley on young sleuths and the TV series 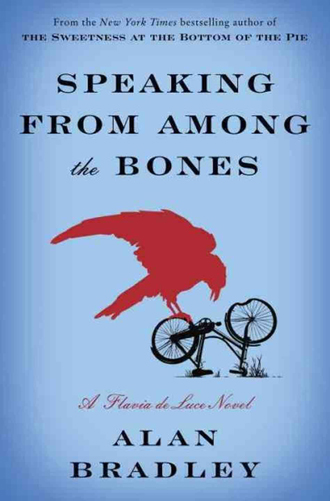 Alan Bradley was already in his mid-60s when he wrote the first of his Flavia de Luce mysteries, starring an almost 11-year-old amateur sleuth in the 1950s English countryside.

His fifth book, “Speaking From Among the Bones,” was published last month, and he is already working on the next one. Bradley is also developing the series for television with Oscar-winning director Sam Mendes, who won raves for his films “Revolutionary Road” and “American Beauty.”

The 74-year-old author spoke to Reuters from his home on the Isle of Man about the TV series and writing mysteries.

Q. How did you ever come up with your character Flavia de Luce? Why did you make her an almost 11-year-old chemist whose particular passion is poison?

A. Flavia just materialized. I can’t really take any credit for her at all. She was presented to me on a platter so to speak. I was trying to write another mystery novel, and Flavia just appeared on the page and completely hijacked my book. And it took me a long time to realize that she wanted her own book. She came absolutely complete with all of her characteristics, her enthusiasms, her house, her family, her chemical lab - all of that was presented to me.

What can you reveal about the TV series? Did you imagine Flavia on the screen as you were writing?

No, no I didn’t. I think I write visually anyway, but I have resisted for years any offers of Flavia becoming a film or TV series. I really thought that unless absolutely the perfect producer came along that it would not be very well done. And I really thought that Flavia was better left to the imagination than embodied in a real person.

But I must admit that when I heard that Sam Mendes had read the books and loved them, I changed my mind .?.?. I don’t think there’s anybody on the planet who’s better equipped to turn Flavia into a TV series.

Why did you write about an ancient country house somewhere in England when you had never been to England?

I grew up in a very British family who had been transplanted to Canada, and my grandmother’s house was filled with English books. I was a very early reader so I was really brought up being surrounded with piles of British books and British newspapers, British magazines.

But when the first book won the Dagger Award and I was whisked off to London, it literally was a dream come true.

Why do you think mysteries are so satisfying?

What pushed you to write a novel? You had a very long career.

I had always wanted to. I had thought for years, probably 30 or 40 years, that it would be a lot of fun to try my hand at a classic English mystery novel .?.?. I love that form very much because the reader is so familiar with all of the types of characters that are in there that they already identify with the book.

You don’t really have to do a lot of work to immerse them totally in the story ... And as many people have said, it’s always easy to tell the murderer in a village mystery because he’s the only person that is from outside the village, which I suppose is true to some extent.

Whatever happened to the novel that you were writing when Flavia appeared?

Oh dear, not much. Flavia and one other character were all that survived of it to date. I might go back to it someday. Reuters


Speaking From Among the Bones