Jones, Hosmer lead U.S. past Canada to move up in the WBC

Jones, Hosmer lead U.S. past Canada to move up in the WBC 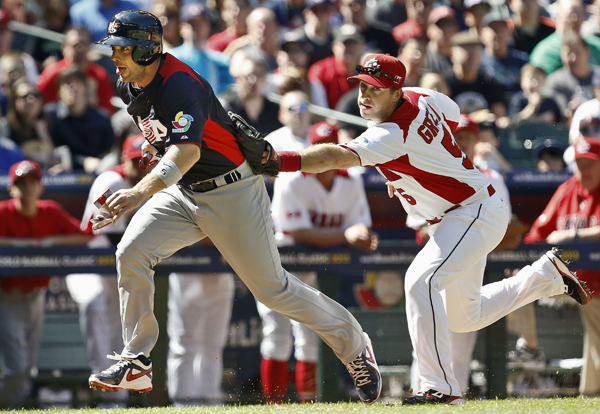 David Wright of the United States, left, gets tagged out during a rundown by Canada’s Taylor Green as Wright tries to score a run in the second inning during a World Baseball Classic game on Sunday in Phoenix, Arizona. The U.S. won 9-4. [AP/NEWSIS]

PHOENIX, Arizona - Adam Jones doubled in the tying and go-ahead runs in the eighth inning and Eric Hosmer hit a three-run double in the ninth as the United States beat Canada 9-4 on Sunday to advance to the second round of the World Baseball Classic. The U.S. trailed 3-2 after seven innings before breaking loose. Team U.S.A. and Italy advanced in Group D while Canada and Mexico were eliminated.

Jones and Hosmer both had a rough week at the plate but came through with the United States on the brink of what would have been a humbling loss. Jones’ hit was his second in nine at-bats. Hosmer was 3 for 13.

Second baseman Brandon Phillips contributed, too, making a diving stop to prevent Canada from tying it in the eighth.

Heath Bell pitched a scoreless seventh to get the victory for manager Joe Torre’s team. Jimmy Henderson took the loss.

Canada’s Michael Saunders, of the Seattle Mariners, hit a two-run homer off starter Derek Holland and was chosen the Group D MVP, going 8 for 11 in the tournament.

The United States finished group play tied with Italy at 2-1 but gets the No. 1 seed because of its 6-2 win over Italy.

David Wright, whose grand slam lifted the U.S. past Italy Saturday night, doubled and walked three times. Ben Zobrist had three hits, none of which left the infield.

Canada, coming off a 10-3 win over Mexico that featured a bruising ninth-inning brawl, finished 1-2. The Canadians have not made it out of the first round for any of the three WBCs.

But they looked in great shape much of the afternoon against the United States, which was looking to avoid its worst showing ever in the tournament. The Americans made it to the second round in 2006 and the semifinals in 2009.

For the third straight game, the U.S. fell behind early. The U.S. broke it open off Scott Matheson and closer John Axford in the ninth.

Phillips started it with a double. Jonathan Lucroy had an RBI single, then Wright walked once again. Axford came on and allowed the infield single to Zobrist. Jones struck out but Hosmer, a late addition to the team when Matt Teixeira was injured, cleared the bases with a shot to deep center.

The New York Yankees slugger had three hits to help the Dominicans finish with a 3-0 win-loss record in Group C. Next, they move on to the second round in Miami, where they will play Group D runner-up Italy on Tuesday. Puerto Rico finished second in the group with a 2-1 record and advanced to face the United States on Tuesday night in Miami.

In Asia, two-time defending champion Japan hit a record-tying six home runs on Sunday to overpower the Netherlands 16-4 and advance to the championship round of the World Baseball Classic.

Hayato Sakamoto hit a grand slam in the seventh to make it 16-4 and the game was called under the 10-run mercy rule when the Netherlands failed to close the gap in the bottom of the inning. AP