Women in their 30s, 40s struggling to keep jobs

Women in their 30s, 40s struggling to keep jobs 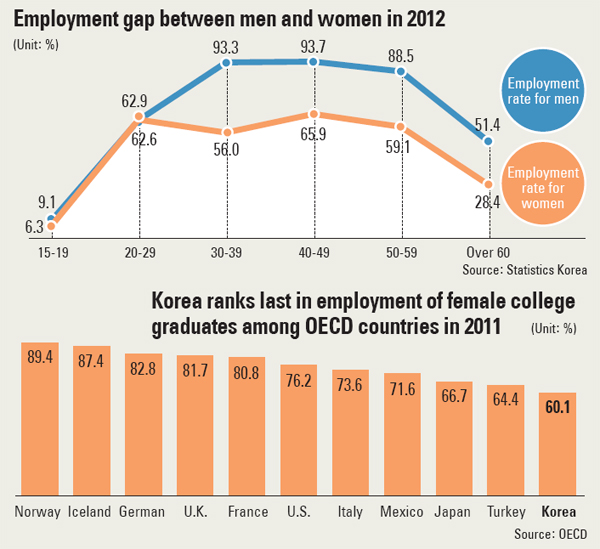 Korea ushered in a new era of feminine leadership last month with President Park Geun-hye at the helm, but that doesn’t necessarily mean other women are encouraged to move into top leadership positions and engage in career activities like her.

A series of data found that many Korean women - especially in their 30s and 40s - struggle to maintain their jobs after marriage and childbirth.

Seo Yeon-kyung is a prime example of the difficult position of her peers.

She managed to find a job at a construction company five years after giving birth, but the 38-year-old earns half as much as she used to at an IT company before her marriage.

“I make around 1.2 million won [$1,095] a month, which is half as much as what I used to make before marriage. But I am satisfied now, because it’s a full-time position. I know there are lots of working moms who count on part-time jobs,” she said.

Her words appear to hold true as more than 40 percent of women in their 30s are looking for jobs.

The gender employment gap between men and women surged more than 30 percent for those in their 30s last year, with the male employment rate estimated at 93.3 percent against that of women at 56 percent.

But the employment rate of women in their 20s surpassed that of men last year with 62.9 percent to 62.6 percent, prompting experts to attribute the career vacuum in their 30s and 40s to be caused by marriage and having children.

“The figures were all predictable because there is a long way to go to achieve gender equality, both at work and in the hiring process,” said Kim Young-ok, senior researcher at Korean Women’s Development Institute, a research institute for gender policy.

“When it comes to female college graduates, career disruptions after marriage really take their toll on women,” she said.

In line with her concerns, Korea ranked last in employment of female college graduates among 33 OECD countries, according to data by the organization of advanced countries.

Korea’s rate stood at 60.1 percent, a huge contrast with Norway, the highest, at 89.4 percent.

Even if middle-aged women get a job, chances are these women will be forced out of full-time jobs and relegated to less-paid and temporary work.

“Before I got married I worked at a bank. When I resumed the job search, it was hard to get the same position because the position was occupied by recent graduates,” said Lee Seon-jin, 43, who now works as a cashier at a retail market.

In response to the challenge facing women, the government began operating a career center in 2009 dedicated to female job hunters who have trouble finding suitable positions.

The number of centers rose from 70 in the beginning year to 112 last year, playing a key role in helping some 1,000 women get a job.

Still, many point out that there is room for improvement.

“Now, the program is mainly for women from modest backgrounds who want to make a living by getting a job. We need a course that can bring highly educated, qualified women into the job market,” said Kim Nan-su, a researcher at the Korean Women’s Development Institute.