At exhibits, artists aim to move beyond facade

At exhibits, artists aim to move beyond facade 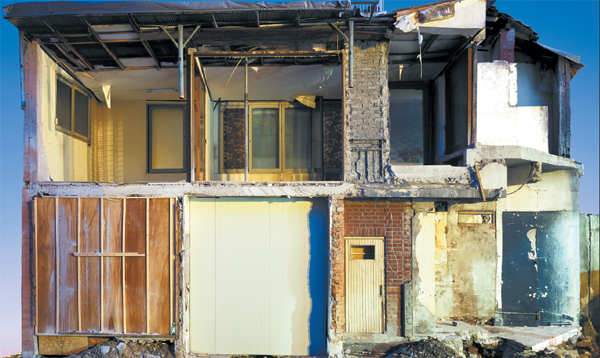 Two solo shows going on in Seoul - one by a photographer and the other by a painter - invite the viewers into a world where borders between reality and illusion are blurred.

In Han Sung-pil’s photographs and in Han Un-sung’s paintings, architectural structures hover between physical reality and the illusory images of spaces reflecting people’s impressions and memories.

The photos by Han are now displayed at Arario Gallery Cheongdam in southern Seoul. They include the latest works of his “Facade Project,” for which the 41-year-old artist has gained fame. The series include photos of screens that cover buildings under construction or repair and are decorated with images of the completed buildings. They also include photos of buildings covered in trompe l’oeil murals. 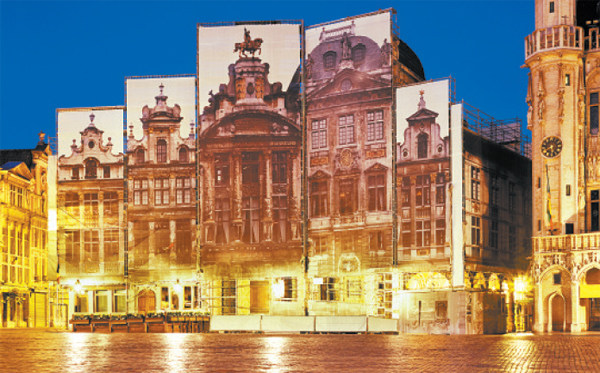 From top, “Inside-Out”(2012) and “La Grand-Place”(2012) are part of photographer Han Sung-pil’s solo exhibition at Arario Cheongdam in southern Seoul. Provided by the gallery

Han captures them in rich yellowish light against the deep blue sky just before sunrise or after sunset, which is his signature style. At the same time, the work is so elaborate that it is difficult to see where the screens or murals end and the surrounding environment begins. With the series, he has raised questions about boundaries between reality and illusion and between original and replica.

The exhibits also include Han’s new series of photos which capture half-demolished buildings at redevelopment sites. They are real but look surrealistic, consistent with his “Facade” series.

One photograph is “Inside Out” (2012), which shows a house with its cross section exposed. The house was cut in half for the construction of a road, Han explained.

“The interior of the house, which was once a private and emotional space, is now just exposed to passersby,” the artist said. “So, it hovers over the boundary between just the materials of concrete and bricks and a psychological space with the traces and memories of the family who once lived here.” 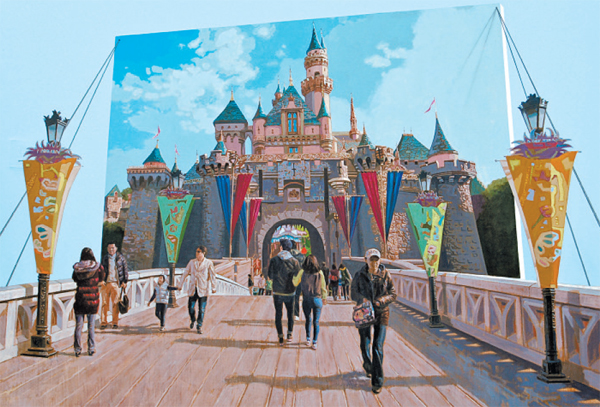 “Fantasy Land”(2012), an oil painting by Han Un-sung, is part of his solo show at Gallery Ihn. Provided by the gallery

The paintings, now on display at Gallery Ihn in the art zone east of Gyeongbok Palace in central Seoul, depict buildings in famous tourist spots with only their facades remaining and supported by props. They look just like building sets on theater stages.

The artist pointed out in a release that tourists take photos of famous buildings without paying much attention to the space behind the facades. His photos reflect this irony.

The “Han Un-sung: Digilog Landscape” exhibition runs through March 20. Admission is free. Gallery Ihn is open from 10 a.m. to 6 p.m. from Tuesday to Sunday. For more information, visit www.galleryihn.com or call (02) 732-4677.