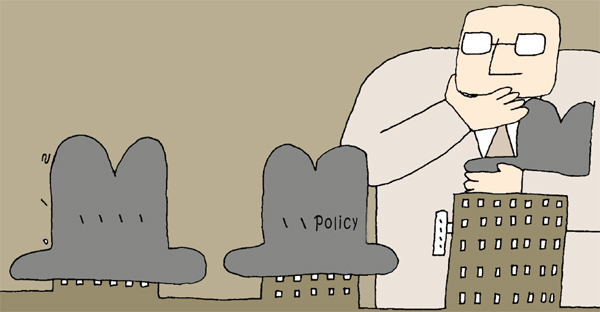 Amid the deadlocked negotiation between the ruling and opposition parties, the government reorganization bills are still pending at the National Assembly, causing the administrative paralysis to continue. Although President Park Geun-hye hurriedly appointed some of her ministers and hosted the first cabinet meeting due to the urgency of North Korea’s repeated war threats, the absence of key ministers only highlighted the administrative vacuum in the new government.

The ruling and opposition parties are giving no ground on who will have jurisdiction over the system operators of cable televisions. While the ruling Saenuri Party argued that the new Ministry of Future Planning and Science should have oversight over the system operators, the opposition Democratic United Party argued that they must remain under the control of the Korea Communications Commission.

The ruling party argued that the system operators should fall under the jurisdiction of the ministry to develop the information, communication and technology industry - the key for the “creative economy” project of the new administration. But the DUP thinks differently, that allowing the new ministry to oversee the industry will lead to the government's exploitation of the system operators.

The two parties are arguing fiercely over who should be in charge of the operation of a single government division. The arguments of the two parties, however, showed that they have completely different perspectives. The Saenuri Party is approaching the issue from an economic point of view, while the DUP is interpreting it from a political point of view. Given such a sharp disagreement, it is no wonder they cannot reach a compromise anytime soon.

President Park’s recent address to the nation clearly showed why the situation has reached this point. “For our economy to make a leap and create quality jobs, we must come up with a national growth engine through developing the information, communication and technology industry based on the convergence of science and technology and broadcasting and communication,” she said. Park made it clear that it is an economic issue.

She, then, said the DUP must not approach the issue with an obsolete political debate trapped in the past. She stressed that the DUP has politicized an economic issue. The only way to resolve it is either translating the ruling camp’s economic logic into political language to persuade the opposition party, or the ruling party should accept the opposition party’s argument and resolve it politically.

But neither of these options seems possible, because Park has no intention to persuade the DUP or negotiate a political compromise.

“As the president, I cannot back off on this issue for the sake of the country’s future,” she said. “Without [the broadcasting promotion function], the Ministry of Future Planning and Science will be nothing but a hollow shell.”

We should think about one point. No matter how important it is economically for the ministry to handle the promotion of the broadcasting industry, we must decide separately if it is a matter grave enough to justify the current administrative vacuum. Of course, Park thinks it is something that she cannot concede. “Inventive economy” is the slogan for her pet project that will differentiate her government from the predecessors and the development of the information, communication and technology industry is the key for her campaign, so she believes the new ministry should naturally oversee the industry.

Although her logic appeared to be coherent, it is not appropriate to use it as a standard to measure the graveness of an issue, because a creative economy is not the sole and overall goal of the Park administration.

Her presidential transition committee said the top priority of the Park administration is creating jobs, and a creative economy was presented as a way to create jobs. There are many ways to create jobs and an “inventive economy” is only one of many means to achieve the goal.

From such a perspective, a creative economy is relatively a lower goal and development of the information, communication and technology industry is a way to deliver the goal. It is too much for Park to risk overall state affairs with a secondary issue. The innocence of her government restructuring plan to improve the economy can easily be misunderstood as an attempt to fight against the opposition party politically.

“Inventive economy” is an economic goal tailored for the Park administration, but no one will remember the slogan. Furthermore, it is not a policy for an immediate outcome, but more of a long-term growth strategy for South Korea’s future. It doesn’t seem to be so urgent, and that’s why the general public has a hard time agreeing with the president. The people are more interested in more effective measures to overcome the imminent challenge of low growth than the long-term growth strategy.