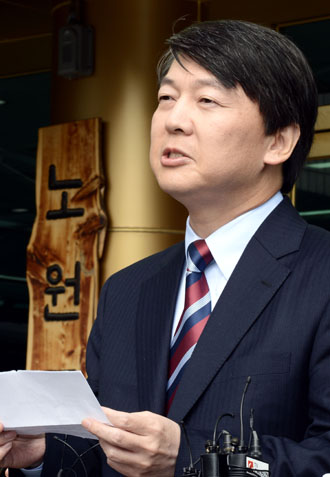 Former presidential wannabe Ahn Cheol-soo registered his candidacy to become a lawmaker in a constituency of Seoul yesterday, taking a second stab at becoming a liberal independent politician.

Ahn, a 51-year-old businessman-turned-professor, ran in last December’s presidential election as an independent liberal and shook up the race with delirious support from young voters, liberals and people sick of politics as usual.

But after protracted and difficult negotiations with the Democratic United Party over merging his candidacy with its candidate, Moon Jae-in, he abruptly dropped out of the race and endorsed Moon.

Hours after voting in the election, he boarded a plane for the U.S. to go into a kind of self-exile, which ended with his return March 11.

An aide to Ahn registered his candidacy yesterday to run in the April by-election in Nowon C District, northeast of Seoul, a liberal stronghold.

After that, Ahn held a press meeting at the Nowon District Office.

“I will make the start of a new kind of politics for ordinary people and the middle class in Nowon,” Ahn said. “I spent my first night in Sanggye-dong, [in the district], and registered myself as a candidate to be the Nowon C District’s lawmaker.

“Nowon is a place where a lot of different interests are needed, such as welfare for retirees, improved housing and education for children,” he said. “If I am given an opportunity, I want to become a lawmaker to resolve the problems of Nowon with you.”

When asked about critics who say Ahn is taking an easy path by running in Nowon, he said, “There is no easy constituency.”

In every legislative election in the Nowon C District since democracy was restored in 1987, voters have elected liberals except in the 18th National Assembly election.

According to a poll by JTBC and Real Meter that surveyed 700 eligible voters in Nowon, Ahn received 35.4 percent support, followed by 29.5 percent for Lee Joon-suk, a potential candidate of Saenuri.