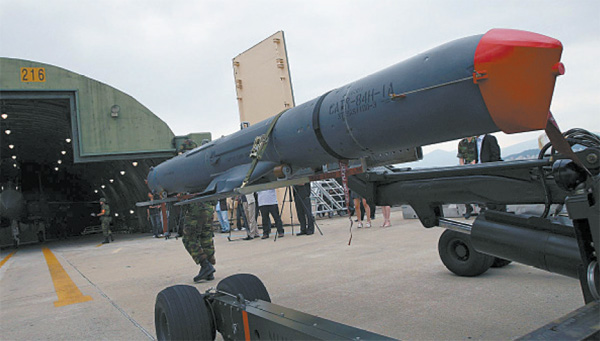 A SLAM-ER missile is loaded onto a F15K fighter jet in this stock photo from 2009. [JoongAng Ilbo]

A Ministry of National Defense official stated yesterday that the U.S. Navy informed the South Korean Air Force that defects were found in an estimated 16 of its AGM-84H Standoff Land Attack Missile-Expanded Response, or SLAM-ER, missiles.

“On [March] 4, our Air Force was notified by the U.S. Navy that the SLAM-ERs which we purchased from them may have a defect in the engines, so use of them should be halted until the cause is discovered,” said the official.

South Korean military previously boasted about its precision missile capability after North Korea threatened nuclear attack on Seoul and Washington. These precision-guided, air-to-ground surface SLAM-ER missiles were purchased through the U.S. Department of Defense’s Foreign Military Sales program, hence the U.S. Navy will facilitate investigation into the flaws in their turbojet engines.

The high-subsonic missiles, developed by Boeing, are 4.4 meters (14 feet, 5 inches) in length and weigh over 679 kilograms (1,497 pounds). They are extremely accurate, using a GPS-aided guidance system, and have the ability to penetrate a reinforced concrete wall up to 1.2 meters thick, with a range of over 270 kilometers.

The defects were not found in the missiles that the South Korean Army imported but rather in the ones purchased by another country that also deploys SLAM-ERs, likely Turkey, said the defense official. “Because it was produced in the same line at the same time, there is a chance that those deployed to our Air Force may also have problems.”

Despite Boeing’s claims that the SLAM-ER had a 90 percent accuracy rate in operational tests, in June 2011 a live fire drill in which a F15K fighter jet fired the SLAM-ER missile ended in failure when it didn’t reach the target and fell into the sea. The Air Force was criticized for covering up the event for five months.

“SLAM-ERs are considered strategic weapons by our Army, so if there is a defect in the missile, we need to review replacing all the [SLAM-ER] missiles possessed by our Army,” the official added.

The regime’s leader Kim Jong-un this week made visits to frontline artillery units including Wolnae Islet in the Yellow Sea and implied that their target was South Korean naval forces on Baengnyeong Island near the western maritime border and other northern islands of the South.

“The drills this time do not appear to be nationwide military drills,” said Kim Min-seok, spokesman of the South’s National Defense Ministry.

“The drills conducted on Kim Jong-un’s visits appear to be artillery drills envisioning Baengnyeong and Yeongpyeong islands [in the Yellow Sea] and several others as targets.”