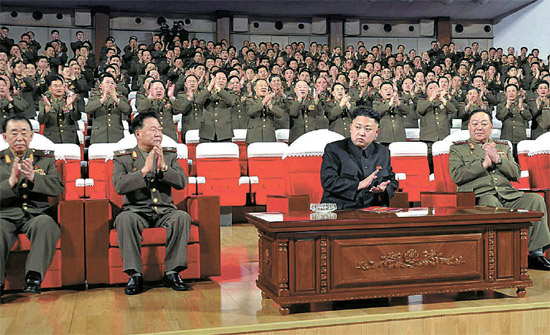 Before North Korea conducted its third nuclear weapons test in February, a bitter disagreement over its wisdom arose between Kim Jong-un and his uncle and political protector Jang Song-thaek, a source familiar with North Korean affairs told JoongAng Ilbo.

Jang was against the test, the source said.

“We found that there was a fierce altercation between the doves of North Korea’s ruling party and the hawks of the military ahead of the third nuclear test,” the source said Wednesday. “Uncle Jang was one of the doves, while some military officials, including Choe Ryong-hae, the chief of the North Korean People’s Army’s politburo, were maintaining a hard-line position.”

According to the source, Jang allegedly told his nephew, “We already have a nuclear [weapon], and in this situation, if we conduct an additional test, it could make China turn its back on us.”

Allegedly, the hawks in the military argued that a third nuclear test was essential for the survival of the regime.

“Kim Jong-un appears to have supported the military in order to firm up his rule and boost his negotiating power against the United States,” the source said.

The source said the doves include Kim Kyong-hui, the younger sister of former North Korean leader Kim Jong-il and wife of Jang, and Kang Sok-ju, vice premier of the cabinet.

The hawks allegedly include Hyon Yong-chol, chief of the general staff of the North Korean Army, and Kim Yong-chol, the director of the Reconnaissance General Bureau.

The source said the hawks called for a nuclear test after the United Nations Security Council adopted more sanctions against Pyongyang in response to its rocket launch in December.

The idea that Kim Jong-un sided with the military hawks could mean that the young leader is being controlled by the military.

“The power struggle in North Korea’s inner circle may have been a factor that hastened the third nuclear test,” said Cheong Seong-chang, a senior fellow at the Sejong Institute.

But the test does seem to have led to a deterioration in diplomatic relations between Pyongyang and Beijing.

“After the third test, the attitude of China toward North Korea became very frosty,” the source said. “The soured relations between North Korea and China was brought on by the nuclear test pushed by the military hawks.”

Conflict between the hawks and doves in North Korea is not new. Early last year, there was allegedly tension between doves in the party and the cabinet and the hawks of the military.

At the time, Kim Jong-un allegedly took foreign currency dealings away from the military and gave it to the cabinet, led by the ruling Workers’ Party. That prompted analysis that the country’s long-standing “military first” policy had given way to an “economy first” policy. In July 2012, then-chief of the general staff of the army, Ri Yong-ho, abruptly stepped down, sparking speculation that the influence of the military was waning.

The military appears to have bounced back by successfully launching the Unha-3 ballistic rocket in December 2012 in the name of the “legacy of Kim Jong-il,” the former leader and Kim Jong-un’s father, sources say.

“There is still a question whether Kim Jong-un has succeeded in gaining control of all parts of the regime, including the military,” said Lee Ji-su, a North Korean studies professor at Myongji Unviersity. “In his early days, the hawks got weakened in a power struggle. But later they got the initiative in state affairs and pushed ahead with some military policies.”