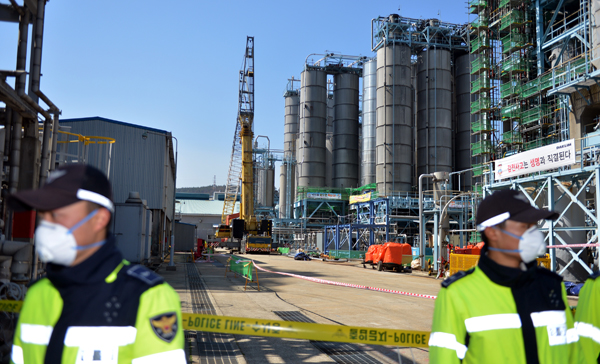 Policemen yesterday cordon off the road to a chemical plant where an explosion Thursday night killed six workers and injured 11 at the Yeosu Industrial Complex in the southern coastal city of Yeosu, South Jeolla. [NEWSIS]

The sudden and massive blast hit the plant, located at the Yeosu Industrial Complex, at around 9 p.m. Thursday, catching workers engaged in welding off guard, some falling 30 meters (98.4 feet) down from the tank to the ground, according to witness accounts.

The death toll is likely to rise as five of the 11 wounded are reportedly severely burned. Firefighters contained the fire within 10 minutes after the blast.

The plant, owned by Daelim Industrial, was undergoing maintenance work at the time.

Workers were welding a door into the tank to make an entrance so the company could send inspectors in to examine the interior, the company said.

The Yeosu branch of the National Plant Labor Union yesterday accused the plant operator of ordering the workers, employed by Daelim subcontractor Yunhan Tech, to begin welding before the flammable gas inside the tank was completely purged.

“It usually takes at least four to seven days to fully extract lingering gas from a tank,” said the labor union. The union said the workers began welding only three days after the plant’s operation was halted for maintenance.

“We checked if there was remaining gas in the tank every time workers were put to work, thus multiple times a day,” said an official with Daelim’s public relations team, who requested anonymity.

“Each time, the result was zero. There was no gas lingering in the tank and thus that was not what caused the explosion.”

Daelim Industrial said yesterday it is possible minute particles of the high-density polyethylene were still inside the tank in the form of powder, and may have ignited when the welding began.

Polyethylene is used to make plastics, including textiles and plastic bags.

The chemical firm is also under fire for its inadequate initial response to the blast. It allegedly ordered workers at the site to move the bodies of burned laborers when it was still possible for additional explosions to occur, until the fire department authorities arrived at the scene.

“I had to move one of my colleagues whose arms and legs were blown off in the blast,” one worker was quoted as saying by Yonhap News Agency.

The Daelim official refuted the claim, saying, “That is simply not true.” He said two of the 11 wounded workers are Daelim employees.

The Ministry of Environment yesterday conducted an examination for any contamination caused by possible leaks of chemical substances from the plant. It said it didn’t find traces of harmful substances on site, in part thanks to the swift response that resulted in the fire being extinguished 10 minutes after it started.

Police said they will carry out further investigations to find out the exact cause of the accident and take legal action against those found accountable for the blast.

The prosecutors at the Suncheon branch office of the Gwangju District Prosecutors’ Office also formed a special investigation team to take on the case.