Secrets of the Eastern Palaces

Secrets of the Eastern Palaces

The Korea University Museum is holding a rare exhibition of two early 19th-century palace paintings called “Donggwoldo.” The works were likely once top secret, as the palaces were shrouded in mystery. Provided by the museum

It’s like looking back through time at Seoul’s palaces with Google Earth.

That’s the impression you get when looking at the two large paintings of Changdeok and Changgyeong Palace - adjacent Joseon Dynasty landmarks in the heart of Seoul - currently on display in a Korea University Museum exhibition called “Donggwol” (East Palaces). Once top secret, painted by unknown hands and containing many mysteries, the works detail the location of much historic intrigue among the royals.

The two pieces, known collectively as “Donggwoldo” (Painting of the East Palaces), together make up Korea’s National Treasure No. 249. They are thought to be two of three such works, and are described by art historians as “the essence of Joseon’s palace paintings.” It’s believed the court painters who created them were the best of the best at the time.

“This is the first and probably the last time that the people of this generation will be able to see the two pieces together,” said museum director Jo Myeong-cheol when the exhibition opened on Feb. 26. 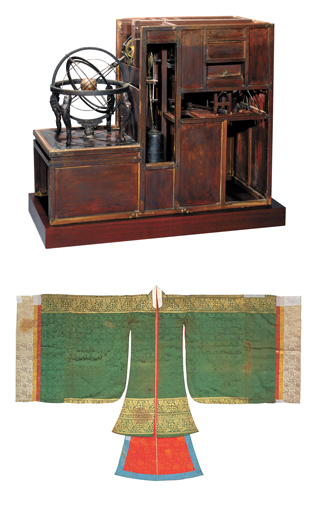 Besides the paintings, the exhibition also features 33 cultural properties related to palace life, such as a 17th century astronomical clock (top) and a hanbok that belonged to Princess Hwasun (1720-1758).

One piece is in the form of a picture book and is normally housed at Korea University in Seoul. The other is a folding screen and is kept by Dong-A University in Busan. The two were exhibited together in October of last year at Dong-A, although only part of the Korea University painting was displayed due to damage.

In fact, the 200-year-painting will likely be put into storage indefinitely after this exhibition, according to the museum officials, due to worries of further damage and wear.

They are both 16-part pieces and when spread out, each measures approximately 273 centimeters (8.96 meters) horizontally and 584 centimeters vertically.

“The painting guides people into each corner of the palaces,” said former culture minister Choe Kwang-shik, who’s currently a history professor at Korea University. “I believe the exhibition will help increase interest in Joseon’s history of painting, architecture and landscaping.”

The paintings show in intricate detail areas of the places that will forever be tied in people’s minds to the events that took place there.

For instance, at the center of Changgyeong Palace is Tongmyeongjeon, the bed chamber of the queen, which was burned down in a fire in 1790 and rebuilt in 1833.

It was where the infamous royal concubine and Joseon femme fatale Jang Ok-jeong (also known as Lady Jang Hui-bin) buried a voodoo doll and an animal carcass to curse the queen. Jang, the mother of King Gyeongjong (1688-1724), was sentenced to death by poisoning in 1701.

Behind Tongmyeongjeon is Jagyeongjeon, a building King Jeongjo built for his mother, Lady Hyegyeong (1735-1815). She witnessed the gruesome demise of her husband, Crown Prince Sado (1735-1762), who died of hunger and thirst after being locked in a rice chest for eight days on the order of his father King Yeongjo (1694-1776). In the picture, Jagyeongjeon is beautiful and serene with flowers blooming in stair-shaped beds. Today, the site is a pine forest.

To the right of Tongmyeongjeon is Jipbokheon, where Crown Prince Sado was born. Yeongjo’s first son died at a young age, and his second son, Sado, was born many years later.

But he ended up killing him due to a political conspiracy in which Sado was accused of wanting to dethrone Yeongjo and become king himself.

These historic figures and events have long been a deep wellspring of inspiration for dramas, novels and many other productions.

Changdeok and Changgyeong were called the East Palaces because they’re located to the east of Gyeongbok Palace, the centerpiece of the Joseon Dynasty. They were secondary palaces mostly used as residences for the royal family.

That said, Gyeongbok was only around for 225 years of the Joseon Dynasty due to fire and restoration delays, while Changdeok and Changgyeong were around for 505 and 426 years, respectively.

Historians assume the painting was made between 1824 and 1830 given that Changdeok Palace’s Gyeongbokjeon, which burned down in 1824, is not represented and Hwangyeongjeon, which was rebuilt in 1830 at Changgyeong Palace, is.

King Jeongjo (1752-1800), the grandfather of Crown Prince Hyomyeong, was known for his fondness for Changdeok.

Jeongjo was keen on advancing the country’s scientific knowledge, and in front of Jungheedang in the center of the painting you can see a sundial, a rain gauge and a weathercock. Historians say the detailed depiction of such equipment shows Crown Prince Hyomyeong’s admiration for his grandfather.

Hongmungwan, in the bottom left of the painting, was where the king’s orders were written up in the form of scrolls. The silver cups drawn in front of it follow historical records that show the king gave the office such vessels.

Efforts were made to learn how the commoners lived with a recreation a farming village. The 11 rice paddies in the bottom right of the painting were where the royals could experience farming for themselves, and Cheonguijeong was the only thatch-roofed building in the palace.

The Japanese transformed the area into a pond during the colonial era (1910-1945).

The king’s efforts to connect with his people did not extend to his paths, however. The palace grounds are all earthen except the roads the king walked on, which are paved with stones.

First, the roof of Donhwamun, the main gate of Changdeok Palace, is clearly a different shape from what it is today. This is strange given that the gate, built in 1412, was destroyed during the 16th-century Imjin invasion by Japan and rebuilt in 1609. Since then, there have been no restorations that historians are aware of.

Another mystery is who the painters are and how they were able to get such a detailed, aerial view of the palaces, which were off-limits to ordinary citizens. The paintings depict each and every ground stone, brick and tree and have the accurate proportions and perspectives of a modern-day blueprint.

Perhaps the biggest mystery of all is why Crown Prince Hyomyeong made such a painting at all, when it would clearly represent a serious threat to the royal family and the dynasty as a whole if it fell into the wrong hands. It could take a while to unravel that one, as there are few historical records on Donggwoldo. “Many experts agree that the paintings were very confidential,” said Bae Seong-hwan, the museum’s curator. “There are few traces of Donggwoldo in historical records.”

The exhibition runs until May 12. Admission is free. Besides the two pieces, 33 palace-related cultural properties are on display. The museum is closed on Monday. It’s near exit No. 1 at Korea University Station on Line 6. For more information, call 02-3290-1514 or visit museum.korea.ac.kr.