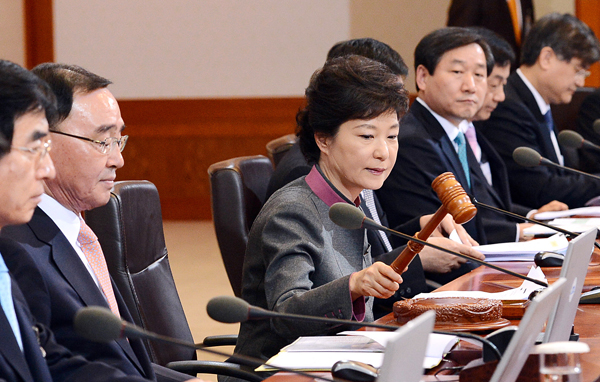 The six decades since the 1953 armistice should have been enough time to end the war and make peace. But we are still living with the fear of war. North Korea threatened to turn Seoul and Washington into seas of flames and scrapped the armistice. South Korean military authorities responded to the threat by declaring that in case of the North’s provocation, they would retaliate against the origin of the provocation as well as the commanders. Acute tension is building across the Korean Peninsula.

Why is Pyongyang acting so aggressively? When it conducted its third nuclear test, additional sanctions by the United Nations were expected. The Korea-U.S. joint military exercise was also no surprise as it is an annual event about which the North receives advance notice. The March 12th issue of the North’s Rodong Sinmun gives a clue. North Korea demands that the United States modify its North Korea policy since the North has become a “nuclear power.” The Korean Central News Agency also reported on the same day, “America’s ambition to crumble North Korea’s socialism can never be realized,” urging Washington to change its hostile policy against Pyongyang. North Korea made it clear that denuclearization is not possible without a peace treaty with Washington.

Of course, Washington has a different idea. In an interview with ABC News on March 13, U.S. President Barack Obama openly suggested that the purpose of the U.S. and international community’s sanctions was “to sink” North Korea. When Pyongyang ends its nuclear and missile tests and shows responsible behavior, Washington would reciprocate and engage again. Obama added that Washington would not reward any bad behavior as it has in the last two decades. “They bang the spoon on the table and then suddenly they get food aid, or they get other concessions,” Obama said.

Obama’s hopeful interpretation on China’s moves is also noteworthy. Beijing had historically “tolerated Pyongyang’s misbehavior because it worried about a collapse of the Pyongyang regime and how that could spill over them,” but China is now recalculating. However, will China continue to cooperate with America while Washington maintains its “Pivot to Asia” strategy to keep China in check? China may help - passively - by executing the UN Security Council resolution, but the possibility of China joining in the project “to sink North Korea” looks very small.

With no one willing to make a concession, the North Korean nuclear issue is as complicated as the Gordian Knot, and it is not so easy for the U.S. to cut the knot like King Alexander. Washington has to keep the possibility of a war in mind. Neither Pyongyang nor Beijing has the patience or wisdom to solve the intractable problem. At this point, the only one who can untie the knot is Park Geun-hye. South Korea has the most to lose as the situation becomes more complicated. So how can we solve this conundrum?

First of all, the Park administration should come up with a bold and comprehensive strategic road map that links the denuclearization of North Korea to a peace system on the peninsula. Instead of an incremental approach, we need a package settlement based on simultaneous actions by Seoul and Pyongyang.

Second, Seoul should contact Pyongyang and get promises to suspend additional nuclear tests and missile launches and not to spread nuclear technology to Iran and other states before Park Geun-hye’s visit to Washington in May. Of course, she would have to bring additional cards to the table - such as resumption of Mount Kumgang tourism or partial lifting of the May 24 sanctions. Considering the political status of President Park, she would be able to make an audacious deal.

Third, at the May Korea-U.S. summit, Park should persuade Obama of the importance of North-U.S. relations and establishment of a peace system on the peninsula. It would be very hard to change the current situation with his fixed mindset. Park can convince Obama by highlighting how her “trust-building process” is different from the policies of the Lee Myung-bak administration.

Last, she could consider discussing a plan to adopt a declaration of cessation of the war and convert the truce agreement into a peace system through a four-way summit among Washington, Beijing, Seoul and Pyongyang.

It may sound overly idealistic as everyone else is talking about a war. But this approach is not very different from the Park administration’s “trustpolitik.” The elevated tension on the peninsula may provide the best opportunity to start loosening the knot.

In the darkest moments, we need to think outside of the box and create a new framework for stable and sustainable peace through the most creative ideas. We hope Park demonstrates courage and wisdom as a “President of Peace.”