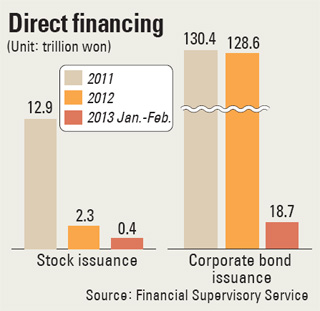 Direct financing by Korean companies went up in February, indicating market conditions that have been hard hit by an economic slowdown are starting to improve.

According to data released by the Financial Supervisory Service yesterday, local companies raised 12.1 trillion won ($10.8 billion) in February through direct financing by issuing stocks and bonds. The February statistic is up 68.6 percent compared to 7.1 trillion won in the previous month.

The cumulative debt and equity issues from January to February amounted to 19.1 trillion, however, was down 18.5 percent from 23.4 trillion.

Companies, mainly large ones, issued a total of 11.8 trillion won worth of corporate bonds, which is up 69 percent from the previous month.

The growth is largely attributed to surging sales of so-called asset-backed securities, which spiked to 3.4 trillion won from 293.5 billion won over the cited period.