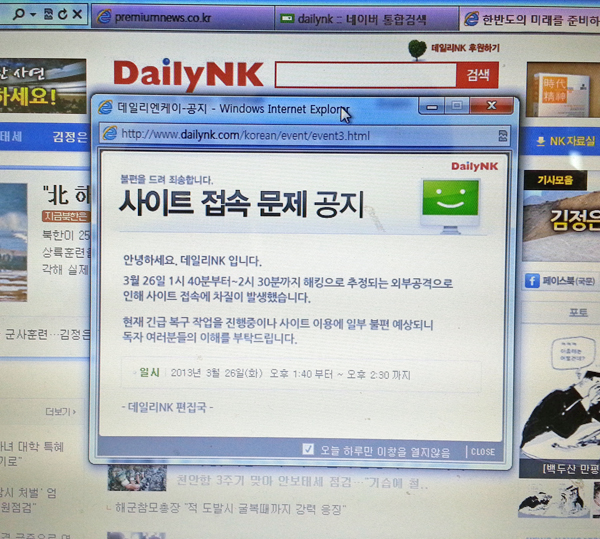 A pop-up notice on the Daily NK home page yesterday reads that a cyberattack is impeding access to the site.

Web sites of organizations and media groups critical of North Korea were shut down simultaneously yesterday in what appeared to be the second major cyberattack in less than a week. The coordinated nature of the hacking and the similarities between the victims have led to speculation that Pyongyang was the mastermind.

The networks of local government offices were also affected yesterday, and a probe is being conducted into whether hacking was the source of the issue.

“The Daily NK’s Internet home page was paralyzed at around 1:40 p.m. due to a cyberattack from an IP address originating in the United States,” the media company said in a press release issued yesterday.

“The database for Tuesday’s articles was erased in the attack, so we’re now running our site with previous articles,” Lee Sang-ryong, a Daily NK staff reporter, told the Korea JoongAng Daily yesterday.

“We couldn’t access our Web site for about an hour, until it was recovered at around 2:40 p.m. We have recognized that all the attacks against other North Korea-related Web sites were staged during the same time period,” said Nam Gong-min, deputy director at the Network for North Korean Democracy.

The sites of the NGO and the online paper were able to get back to normal after about an hour. But Free North Korea Radio and North Korea Intellectuals Solidarity were still down as of 7 p.m. yesterday.

The site of news station YTN was also hit yesterday along with its affiliates, sparking fears that the broadcaster was being targeted again while still reeling from last week’s attacks against TV stations and banks.

YTN first detected abnormally accelerated traffic at around 9:40 a.m., which led to a shutdown of its home page. Access to the home pages of affiliated companies like YTN Science and YTN DMB was also blocked.

After the shutdown was reported, the joint government cyberterror response team dispatched inspectors to the YTN offices that manage the pages in Seongnam, Gyeonggi.

“The government inspectors are now collecting evidence prior to recovering the Web sites,” said an official at Digital YTN, speaking on the condition of anonymity.

The official added the broadcaster is not ruling out the possibility yesterday’s shutdown was caused by hacking though the investigation is ongoing.

The YTN site was still down as of 7 p.m. yesterday.

Meanwhile, the network systems for local governments were also disrupted yesterday at around 10:40 a.m., causing 32 local office home pages to go blank, blocking local officials from accessing the Internet from their offices. The Internet operations of all 32 offices returned to normal by 12:14 p.m., according to Blue House spokeswoman Kim Haing.

Kim said during a press briefing that the government is now investigating whether the problems stemmed from “a mere network equipment malfunction” or “hacking.”

In a cabinet meeting yesterday, President Park Geun-hye called on government officials to get to the bottom of the attacks.

“I would like you to conduct an overall cyber safety inspection on Internet networks used by private entities such as TV broadcasters, communications firms and financial groups as they are more susceptible than the network systems used by state organizations,” said the president.