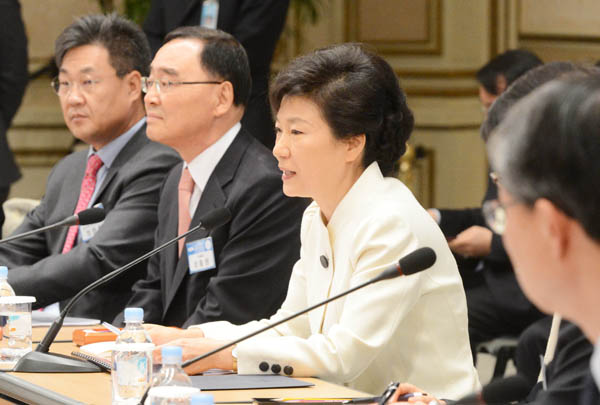 Despite the tense military situation on the Korean Peninsula, South Korea’s new administration led by President Park Geun-hye will continue to work to persuade North Korea to open up dialogue as well as allow more civilian-level humanitarian assistance for the impoverished regime, adopting a more flexible stance than the former Lee Myung-bak administration.

Newly-minted Unification Minister Ryoo Kihl-jae said at a press conference explaining this year’s policy-making plans that the ministry will basically take a two-track strategy in dealing with North Korea - boost inter-Korean relations but pressure Pyongyang to give up its nuclear ambitions.

“I know there are public demands calling for the government’s unification policies to evolve, going beyond the former administrations’ policies,” Ryoo said.

But he said the situation is too grave for it to be improved, referring to the recent military provocations of the regime.

“In the midst of this situation, the Unification Ministry will view this challenge as a new opportunity for the future,” he said. “Taking two top agendas - the trust-building process and preparations for unification - we selected nine main assignments and three cooperative tasks.”

The flexible approach came after criticism over the Lee Myung-bak administration’s so-called “Denuclearization, Openness and 3,000” initiative - the former administration’s policy in dealing with North Korea.

At the time, Lee demanded Pyongyang abandon its nuclear weapons program and open up its economy to the world, and that if they did abandon their weapons he would provide economic support for the impoverished regime until it reaches $3,000 of GDP per capita.

The rigid, conditional assistance came under fire by analysts and soured relations between the two Koreas.

“That condition - ‘No denuclearization, then no dialogue’ - doesn’t exist anymore now,” a senior Blue House official told JoongAng Ilbo by phone. “But it also doesn’t mean ‘Dialogue before denuclearization.’

“A six-party talk can be launched anytime if prepared, and the pressure for denuclearization can also occur [separately],” he said.

“If the two Koreas develop a variety of talks, and if we judge that both have built mutual trust with each other, we can probably talk about North Korea’s nuclear program as one of the agendas,” Ryoo said.

He said the ministry will approve civilian-level aid for the North.

“President Park already has said she will resume humanitarian assistance for the underprivileged classes and children,” the minister said. “If the inter-Korean relations are improved, we can also add more items to the list.”

When it comes to the Kaesong Industrial Complex, he said he will expand its international market.

“When there is a further negotiation of free trade agreement [between the South and U.S. or China or the European Union], I will persuade them to approve products from the complex.”

President Park also warned the North should not unilaterally operate the inter-Korean complex. “Shutting down the complex or raising taxes regarding it suddenly can never be tolerated by international standards,” she said. However, despite her warning, Pyongyang yesterday cut off all military hotlines on the east and west coasts.

The lines have been used to inform how many South Korean commuters are working at the Kaesong Industrial Complex. Previously, the North disconnected five hotlines between Seoul and Pyongyang that are connected through the border village of Panmunjom.

“However, the complex is operating as usual, and commuters are supposed to enter the complex tomorrow as well,” a Unification Ministry official told reporters.