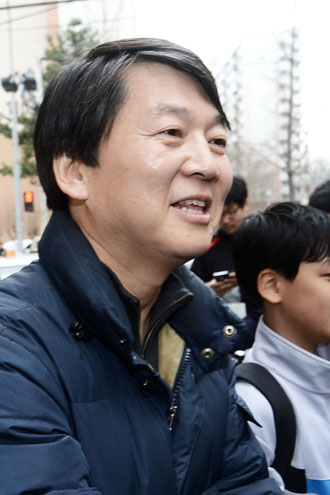 Ahn Cheol-soo, a failed independent presidential contender running in next month’s legislative by-election, denied yesterday growing speculation that he will form an electoral alliance with fellow liberal candidates, reiterating his commitment to what he calls “new politics.”

Ahn, a 51-year-old software mogul-turned-politician who has superstar status among the liberals and the youth, said he wants to have a head-to-head contest to win a National Assembly victory in the April 24 by-election. Ahn is running in Seoul’s Nowon C District.

“Right now, I want to put the idea of new politics at the front and have a head-to-head match,” he said. “If I make the candidacy consolidation a priority once again this time, it may become hard for me to serve the people’s hope for changes in the politics.”

During the December presidential election, Ahn shook up the race as an independent liberal candidate by promoting the idea of “new politics” to appeal to the voters sick of business-as-usual political practices of Korea. But he dropped out of the race in disgust after unsuccessful negotiations with fellow liberal candidate Moon Jae-in over who should be the unified candidate of the liberals. Ahn eventually endorsed Moon of the Democratic United party, but Moon lost to the Saenuri Party’s Park Geun-hye.

The question looming for Ahn is whether he will get bogged down in similar negotiations with other liberal candidates in the Nowon C race or whether the liberal vote will be split among more than one candidate.

The DUP said it won’t field a candidate in Nowon C, but other liberal candidates are running against the ruling Saenuri Party’s Huh Joon-young.

Kim Ji-seon, wife of Roh Hoe-chan, the former Progressive Justice Party lawmaker for the district who lost his seat after being convicted of revealing an illegally taped conversation, is running as that party’s candidate.

Lee Dong-sup, head of the DUP’s chapter in Nowon, also said yesterday that he will resume his campaign, fueling speculation that he will stay in the race as an independent. Jeong Tae-heung of the Unified Progressive Party is also running.

According to a Realmeter poll Tuesday, Ahn was ahead of the Saenuri’s Huh within the margin of error when other liberal candidates remain in the race. If it is a match between just the two of them, Ahn will likely win a major victory, the poll showed.

Despite the DUP’s apparent move to support Ahn by not nominating a candidate, Ahn is keeping a distance from the largest opposition party. Asked about his need for the DUP’s organization and support, Ahn said, “The priority is winning the voters’ hearts and convincing that I can improve the lives of Nowon residents and bring about new politics.”

Representative Moon of the DUP, to whom Ahn conceded his presidential candidacy, said yesterday he wants to help Ahn. “I owe Ahn big time,” Moon said. “Ahn began his political career, and I truly hope the best for him. Ahn’s success will benefit the entire liberal community and also the DUP.”

Ahn also said he feels sorry for candidate Lee over the DUP’s decision to not field a candidate. “I already had a similar experience during the presidential election,” he said. “So I can understand maybe one-tenth of his feeling.”

Ahn also said he respects the decision of Kim to run in her husband’s district. “I also respect and am fond of lawmaker Roh of the Progressive Justice Party,” Ahn said, adding that he shares some philosophy with him.

“I want to define the meaning of the upcoming by-election as an event to rectify politics with the people,” Ahn said. “New politics doesn’t mean that we will create something totally new. It is about politics that fulfills its basic duties.”

Kim, the PJP candidate, said yesterday she is open to the possibility of forming an alliance with Ahn but has no intention of bringing it up with him first.

In an interview with SBS radio, Kim said it is wrong for the liberals to force her minority party to make another sacrifice, but she also understands the voters’ hope for a liberal solidarity. “So, the possibility is still open,” she said.