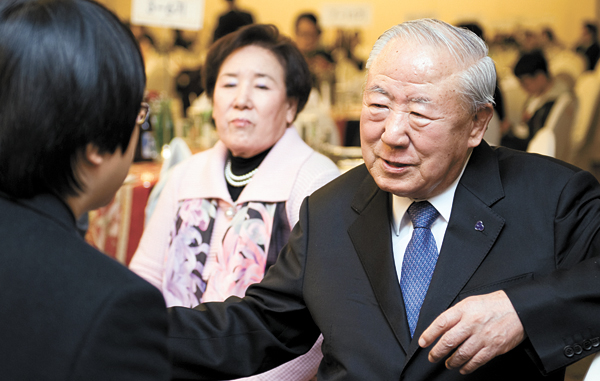 “The scholastic foundation is our company’s philosophy and goal,” said Kim Young-hwan, the 79 year-old Chairman of Songwon Group.

Kim added that the goal of a company is not to seek profits but to give back to society.

Songwon Group was founded by Kim in 1975. Its primary business is chemicals but it also operates expressway pit stops and a cold storage business among other things. It has roughly 1,000 employees with annual revenue between 400 and 500 billion won ($358 and $448 million).

Earlier this week Songwon Group celebrated the 30th anniversary of the Songwon Kim Young-hwan Scholastic Foundation. At the ceremony Kim said Songwon’s foundation is a beacon of hope for people in difficult situations.

Born into a farmer’s family as a second son among nine children in Gimhae, South Gyeongsang, Kim struggled to pay tuition even when he was accepted to Seoul National University. He had to work for months on factory lines. He said every time he spent time working at the factory he thought it was a waste as he had relatively little time compared to his classmate for studying.

“It was at the time that I have decided to make money to help students stuck in the situation that I was,” Kim said. Two decades after graduating from college, Kim took the first step in realizing his goal. He started to give scholarships to children of his employees. As a result, the employees’ morale was boosted and that led to better work performances. The company turned profitable in 1983 and that same year Kim started the foundation.

In the last three decades, 573 students received scholarships for a total of 6.4 billion won. The recipients include Korea University professor Choi Gwan.