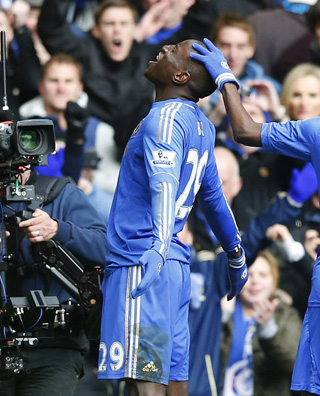 LONDON - Demba Ba sent Chelsea into the FA Cup semifinals with a 1-0 victory over Manchester United on Monday, keeping his team on course for a cup double to make amends for a lackluster Premier League campaign.

The quarterfinal replay came to life four minutes into the second half when Ba exquisitely hooked the ball over goalkeeper David De Gea to set up a Wembley Stadium meeting with Manchester City.

“It was a brilliant pass from Juan,” Ba said. “For Newcastle, I scored quite a similar goal against Man United. It reminded me of that.”

United was denied an equalizer at Stamford Bridge when Petr Cech pulled off a stunning one-handed save to block Javier Hernandez’s close-range header.

While Chelsea also has a Europa League quarterfinal on Thursday, United is left only with the Premier League in which it holds a seemingly insurmountable 15-point lead over City. The two Manchester teams play Monday.

“It was disappointing today, of course, but we have to forget all about it,” United manager Ferguson said. “We are in a good position obviously, and I think a positive result for us on Monday will just about seal the title for us.”

Advancing in the cup was the perfect response by Chelsea to Saturday’s loss at Southampton, which dropped the team to fourth in the league.

Although Chelsea is on course for a fifth FA Cup triumph in seven seasons, the priority for the club is still securing a top-four finish and Champions League qualification. However, the win puts interim manager Rafa Benitez, who is only under contract until the end of the season, closer to getting a trophy to show for his short spell at Stamford Bridge.