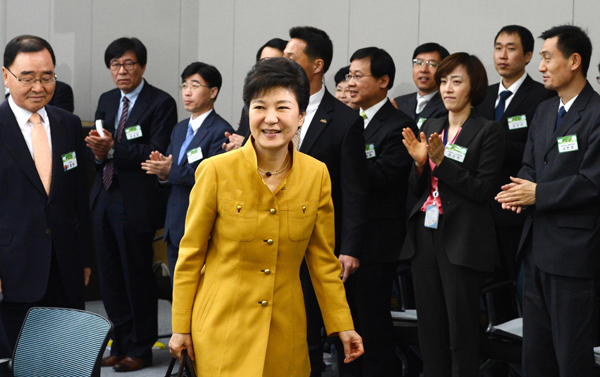 President Park Geun-hye yesterday walks into the office in the Central Government Complex in Sejong City to hear the Land Ministry and the Environment Ministry’s policy plans. Park strongly supported the construction of the city when former President Lee Myung-bak wanted to scrap the plan. [Joint Press Corps]

President Park Geun-hye yesterday visited Sejong City, the administrative hub that she supported for years in the making, for the first time since her inauguration.

Park yesterday went to the government complex in Sejong City in the morning to receive briefings by the Ministry of Land, Infrastructure and Transport and the Ministry of Environment.

“It is meaningful that I am receiving briefings from the Land Ministry and the Environment Ministry at Sejong City, symbol of balanced regional development,” Park said yesterday in her opening remarks.

She also asked the two ministries to work more in harmony to overcome the clash between the ideas of economic development and environmental conservation.

“Until now, we have seen many conflicts over environmental protection and cultural heritage preservation, while pushing forward development projects,” Park said. “Recently, the two ministries also had conflict over the water resources management policy, including the four-rivers restoration project and dam construction.”

Park’s last visit to Sejong City was during the presidential campaign last year. The relocation of the government offices to the city in South Chungcheong is a symbol of Park’s image as a politician who follows through with her proposals.

The idea of creating an administrative capital city in the Chungcheong region was first floated by Roh Moo-hyun in September 2002 as a presidential campaign pledge.

His idea was to decongest Seoul by moving the country’s capital to the Chungcheong region. The flip side was that economic development would be brought to a region that had fallen behind.

Roh’s successor, President Lee Myung-bak, however, wanted to keep government workers in Seoul, while substituting the government relocation with other development plans by making Sejong City an industrial, science and education hub.

Opposition parties opposed Lee’s plan, as did Park and other ruling party lawmakers loyal to her.

Political observers said Park’s consistent position to keep the Sejong City plan contributed in creating her image as a trustworthy politician. They also said the image helped her to win the 2012 presidential election.

“Park’s trip to Sejong City today means that she will move more aggressively to reach out to the nation from now on,” Kim Haing, spokeswoman of the Blue House, said yesterday.

“The Blue House will explain everything to the legislature,” Kim said. “It is the president’s belief that enough explanation should be provided well in advance.”

The remarks came as recent surveys showed the president’s approval rating falling. According to Realmeter’s survey, conducted from March 25 to 29, Park’s approval rating was 45 percent, plummeting from 54.8 percent at the time of her inauguration in late February.

In another poll by Gallup Korea, her approval rating was 41 percent, dropping 3 percentage points from the previous week. The survey took place from March 25 to 28.