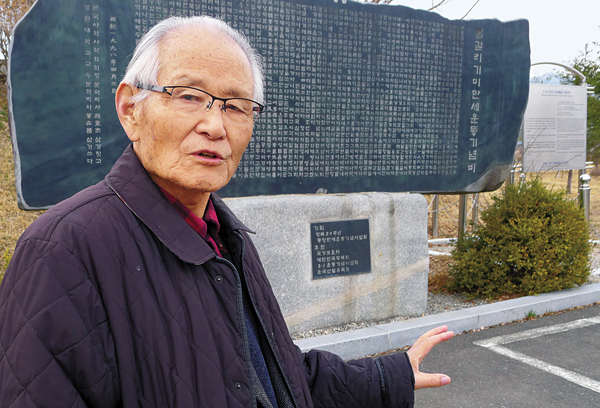 On the morning of April 3, 1919, just a month after the March 1 Independence Movement when young Korean activists declared Korea’s independence and triggered large demonstrations against Japanese colonial rule (1910-1945), a group of 3,000 activists in Dongchang village in Hongcheon County of Gangwon protested against the Japanese occupation of the Korean peninsula.

Japanese police fired on the activists, killing eight people and injuring 20 others. The incident is now remembered as the April 3 Dongchang independence movement.

A day before the celebration commemorating the independence activists, Kim Chang-mook, chairman of Dongchan Corporation, was overseeing planting trees in nearby Yonghoteo, where Kim Duk-won, leader of the April 3 Dongchang independence movement stayed ?for three years until he was arrested by Japanese police.

Kim, a 91-year old businessman, directly guided labor workers where to plant trees. Despite his age, his voice was strong and clear.

Kim used his own money to buy Yonghoteo and ?Mount Cheokya to remember the historic movement and he has spent 23 years turning the area into a history education park.

“Mulgeol-ri, where residents of five small villages participated in the independence movement, is a special place, given that the historic event happened in smaller villages,” Kim said. “I’m creating a memorial park to enlighten the national spirit of Korea.”

Kim, who was born in a village four kilometers away from Mulgeol-ri, left for Harbin, China, at the recommendation of his teacher after he graduated elementary school.

He lived there as a farmer and returned to Korea ?after it was liberated from Japanese colonial rule in 1945.

Kim invested a considerable amount of money to establish Gimi Mansae Park at the request of Hongcheon County Office in 1991?.

?To save expenses, Kim ?designed the park. He came to the site five days a week to look after grass and trees.

The park, which is home to 200,000 trees, has about 100 monuments where former President Choi Kyu-hah and renowned artists engraved words commemorating the independence movement day.?