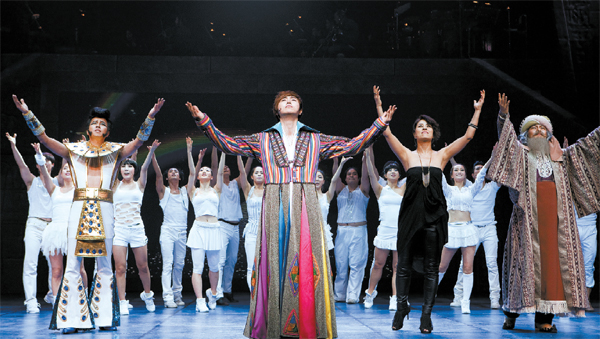 The Korean production of Andrew Lloyd Webber and Tim Rice’s “Joseph and the Amazing Technicolor Dreamcoat” is being staged until Thursday at the Charlotte Theater. Provided by the organizer

Using stories based on characters in the Bible such as Jesus, Joseph and Moses ha?s been quite a popular ?theme for ?most genres of culture, including films, novels, musicals and theater plays.

A legendary ?duo in the musical world - Andrew Lloyd Webber and Tim Rice - also used parts of ?biblical stories ?for their works. The?ir first musical to be performed publicly in 1968 was “Joseph and the Amazing Technicolor Dreamcoat,” a musical based on the story of Joseph and his “coat of many colors” from the Bible’s Book of Genesis. And of course, there’s also Webber and Rice’s most-protested work in the history of musical theater that depicts the final week of Jesus’ life, the rock opera “Jesus Christ Superstar.”

Musicals dealing with ?biblical stories ?that appeared in the musical theater world have long aroused controversy. When “Jesus Christ Superstar” was first staged on Broadway in 1971, it was condemned by some conservative Christian groups, who insisted the musical was blasphemous as it portrayed the central figure of their religion, Jesus, the “son of God,” as a fallible figure uncertain of his own divinity, while portraying Judas, who betrayed Jesus, as too sympathetic.

More recently, the show was banned in June ?in Belarus after a campaign by Orthodox prelates, who claimed to be acting on the wishes of “insulted believers.” The show’s 2011 tour of Ireland was picketed by Presbyterian ministers who denounced it as “an utter blasphemy” produced by “two sinful, blinded, benighted sinners.” In 2008, a Texan Baptist declared: “Every born-again Christian should readily recognize the evil of ‘Jesus Christ Superstar.’”

Despite such controversy, Seol Do-yoon from Seol & Company decided to stage it again at the Charlotte Theater in Jamsil, southeastern Seoul, beginning April 26.

“When ‘Jesus Christ Superstar’ was staged in 1973, conservative Christians got offended as they believed rock music was diabolical. Such protests continued in Korea when the musical was first staged in Seoul,” said Seol. “This time I am also anxious to stage the musical, but I hope the audiences watch it as a masterpiece in musical history rather than from the religious aspect.”

A Korean production of “Joseph and the Amazing Technicolor Dreamcoat” has been running since February at the Charlotte Theater and the curtain will fall on Thursday.

Musical critics warn ?audiences of “Joseph and the Amazing Technicolor Dreamcoat” to let go of their “religious viewpoint” when watching the musical.

“If one watches this musical with a ‘religious devotion,’ he or she will definitely be irritated as the musical centers around the character Joseph, however, a few changes were made and it does not entirely follow the storyline in the Bible,” said Jeong Soo-hyun, an adjunct professor of theater and film at Hanyang University.

For example, the musical has a scene where Joseph gets held by Potiphar’s wife and ?is forced to sleep? with her. However, in the Bible, Joseph refuses the wife’s seduction, and runs away from her after she grabs onto his cloak.

Scenes where Pharaoh, who is portrayed as a funny leader who enjoys playing golf, dances like Elvis Presley on stage as a pop icon, or where Joseph’s brothers do slapstick comedy as they cry and laugh after abandoning Joseph, display Webber and Rice’s youthful wit and jokes, according to Jeong, saying that the audience should enjoy the musical as it is presented.

While some protesters complain such musicals that reinterpret the Bible “project the wrong image of Jesus Christ,” others insist such musicals that “include some religious aspect by using simple lyrics and beautiful melodies dispel antipathy towards religion and eliminate repulsion.”

“Godspell,” a musical by Stephen Schwartz based on the Book of Matthew in the New Testament of the Bible, is considered the most successful off-Broadway production. It opened off Broadway in 1971. While “Jesus Christ Superstar” portrayed Jesus through Judas’ eyes, “Godspell” focuses on Jesus’ walk through life. Using modern rock and dance, the musical cites 43 verses in the Bible in an attempt to allow “audiences to feel closeness to the story in the Bible,” according to Asap Production, the organizer of the latest Korean production of “Godspell,” which was staged in 2009.

“Maria Maria,” a Korean-produced musical in 2004, is one of the few Korean-produced “biblical musicals” that received praises for literary value while accompanying mass appeal. Similar to “Jesus Christ Superstar,” which has gained success through extreme reinterpretation of the Bible, “Maria Maria” reinterprets the life of Mary Magdalene, who was a prostitute, to suit Korean sentiments. The musical was last staged in Korea in November to celebrate its 10th anniversary.