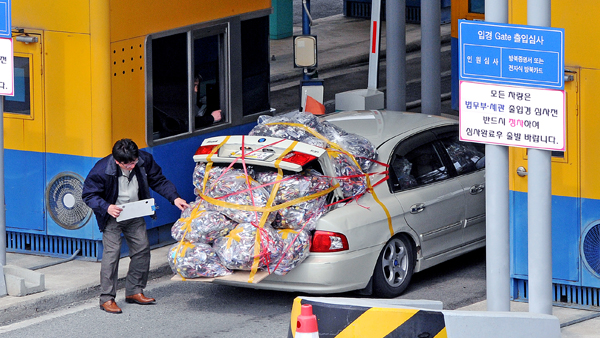 A passenger car with a trunk full of products from the Kaesong Industrial Complex yesterday passes through a clearance gate at the Customs, Inspection and Quarantine Office in Paju, Gyeonggi, near the inter-Korean border. Pyongyang announced the same day that it would temporarily suspend operations in Kaesong. [NEWS1]

Pyongyang yesterday announced it would temporarily suspend all inter-Korean business in the Kaesong Industrial Complex, a primary remaining symbol of inter-Korean cooperation.

It is the first time for Pyongyang to close down the factory park jointly run with Seoul since December 2004. As one of the three major inter-Korean projects, along with the cross-border railway construction and the Mount Kumgang tourist resort, the complex was the last remaining legacy of the Sunshine Policy.

“As the Kaesong Industrial Complex is at a risk of crisis, I declare grave measures as following,” Kim said. 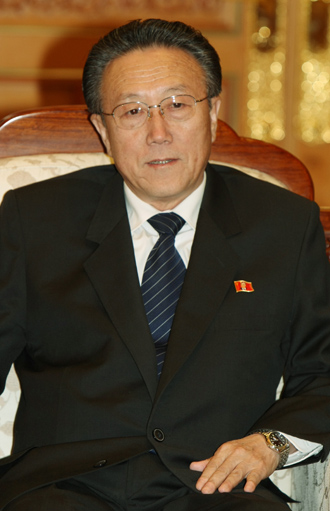 “First, we remove all of our employees from the complex,” he said. “Second, in a condition that the South Korean government and military warmongers are insulting our dignity and creating a hotspot for a fratricidal confrontation, we temporarily suspend the business in the industrial district, and we will also review whether to abolish it.”

He also said the complex will be managed by the “Central Guidance to the Development of the Special Zone,” a North Korean organization in charge of special districts.

Previously, the complex has been managed mainly by the Kaesong Industrial District Management Committee, an inter-Korean body.

“This unilateral measure can’t be justified for any reason, and the North Korean regime will have to take all responsibility for [the result],” the statement said.

Regarding the remaining workers from the South, a Unification Ministry official said the government “will discuss the matter with the association” of South Korean businessmen.

Kim, a high-ranking North Korean official overseeing inter-Korean business, made a surprise visit to the complex, the North’s official Korean Central News Agency reported, before he issued the statement.

Kim said in his statement that hawkish South Korean conservatives led him to make the decision.

Concerns have been growing in the South over safety of the remaining South Korean workers in the joint industrial park, since Pyongyang began blocking all laborers and cargo from going into the complex. There was also concern that they could be taken hostage in the event of a military clash with the North.

Kim also refuted some South Korean media reports that the zone is a vital source of U.S. dollars for the regime, given the fact that the revenue for the North from the Kaesong complex was about $80 million in 2012.

So far, Kim is the second high-ranking North Korean official to visit the complex.

In November 2008, Kim Yong-chol, who is head of the Reconnaissance General Bureau and a hard-line four-star general, visited the complex as then-policy-making manager at the powerful National Defense Commission.

A week after his visit, he announced the so-called “Dec. 1 Measure,” including disconnecting communication with the South and restricting South access to the inter-Korean complex, in the midst of frosty inter-Korean relations. The measure was lifted eight months later, in August 2009.

The South’s Unification Ministry said yesterday that a total of 14 out of 123 South Korean firms had shut down their factories until yesterday, due to the regime’s entry ban.

A total of 39 South Korean workers returned yesterday, and 475 South Korean and four Chinese workers stayed at the complex yesterday. About 53,000 North Koreans have been working there.

An increasing number of owners of the South Korean companies in the complex said they can’t tolerate the dire working conditions anymore.

“Owing to the entry ban, there is no food, no raw material, no fuel [from the South],” an official at the association for the South Korean firms in the complex told the Korea JoongAng Daily by phone. “Starting this week, there will be a number of companies deciding to shut down their factories.”

Out of the 123 companies, 76 are textile manufacturers and others manufacture mechanical parts or chemical products. The owners said all of the companies are likely to run out of remaining materials within two to three weeks.

The South’s Unification Ministry spokesman Kim Hyung-suk said at a daily briefing that all of the seven doctors and nurses working at the only hospital in the complex returned to the South over the weekend.