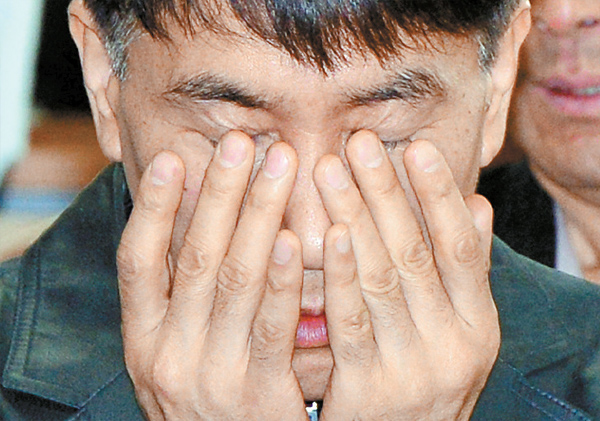 A businessman who runs a company in the Kaesong Industrial Complex covers his face yesterday at the Korea Federation of Small and Medium Business in Yeouido, western Seoul, before a contingency meeting was convened. [NEWSIS]

None of the 53,000 North Korean workers appeared at the inter-Korean industrial complex yesterday morning, causing all factories in the zone to shut down.

It was the first time the complex has been closed since it began operations in December 2004.

It is the last-remaining symbol of former President Kim Dae-jung’s Sunshine Policy intended to boost inter-Korean business for the reunification of the two Koreas.

The shutdown came after North Korea began blocking workers and cargo from the South from coming into the complex on April 3, in the midst of rising military tensions.

Since the North tested its third nuclear device in February and a long-range rocket, Unha-3, last December, the regime issued a flurry of threats against Seoul and Washington, in defiance of tougher sanctions and condemnations from the international community, even including the reclusive regime’s closest ally and business partner, China.

Pyongyang was also unnerved by the ongoing Seoul-Washington annual military exercises in the South, although the allies say it was routine.

South Korean President Park Geun-hye said the suspension “is very disappointing” to her.

“North Korea should stop its wrong behavior and make a right choice for the future of the Korean Peninsula,” she said at a cabinet meeting. “Until when should we repeat this endless vicious cycle, a crisis [caused by the North], negotiation and support [by the South]?”

Concerns were also high in the South’s Unification Ministry, which is in charge of inter-Korean cooperation.

“There is no reason to keep unnecessary manpower [from the South] in the complex,” a Unification Ministry official told reporters. “Still, it depends on the company owners whether they will bring their employees back from the complex.

“It is not a mood for dialogue,” the official said. “The North is conscious of responses [from the international community]. They are trying to get attention.”

But the ministry official said the government still wants to maintain the cross-border complex and urged the North to normalize the operation.

When it comes to compensation for the losses the South Korean firms in the complex will incur, President Park said the government will compensate them from the Inter-Korean Cooperation Fund, a South Korean state budget apportioned for annual inter-Korean business. Statistics released by the Unification Ministry show the total amount of the fund was about 1.6 trillion won ($1.4 billion) by 2012.

The ministry said most of the companies in the complex already bought insurance from state-run Export-Import Bank in case of a national security crisis.

“Out of the 123 companies, 96 purchased the insurance,” a Unification Ministry official told the Korea JoongAng Daily. “The insurance will cover 90 percent of the losses, and 7 billion won per company at maximum.”

According to the Unification Ministry, the revenue of the entire 123 companies in 2012 was $469 million. Total investment both by the government and the private sector was 960 billion won($842 million) in total.

“As far as I know, the entire loss of the companies would reach up to 6 trillion won, in the worst case, considering their unused materials, sales and contracts with their subsidiaries,” Cho Bong-hyun, a research fellow at the IBK Industrial Bank, told the Korea JoongAng Daily.

The North will also lose income from the complex. The revenue for the North from the Kaesong complex was about $80 million in 2012.

Desperately hoping the complex would resume operation, a total of 406 South Korean workers and two foreign workers remained in the complex yesterday.

The association of South Korean firms in the complex said during a press conference that they couldn’t handle the situation anymore.

“If this situation continues, all of the companies will face bankruptcy,” Yu Chang-geun, vice president of the association, told a press meeting yesterday. “We are almost reaching the threshold. “The owner of the complex is us,” Yu said. “We don’t have any plans to vacate our employees from the complex now.”

Yu also said they will ask the government to send a delegation from the companies to Pyongyang, in an effort to persuade the regime to change its mind.

“The scale of the delegation and when it will be sent will be negotiated with the government,” Yu said. “I will ask the government to send one as soon as possible. If it is too late, companies will not be able to recover.”

The opposition Democratic United Party, which choreographed the Sunshine Policy and the complex, also said in a resolution that the suspension “is very regrettable” and urged the government to start a dialogue with Pyongyang under any conditions.

Despite a flurry of military provocations from the North, including the sinking of the South’s warship Cheonan and the deadly shelling of Yeonpyeong Island, the complex continued to run, while other inter-Korean projects were frozen.

In November 2008, North Korea disconnected communication with the South and restricted its access to the inter-Korean complex, in the midst of frosty inter-Korean relations.

The measure was lifted in August 2009.