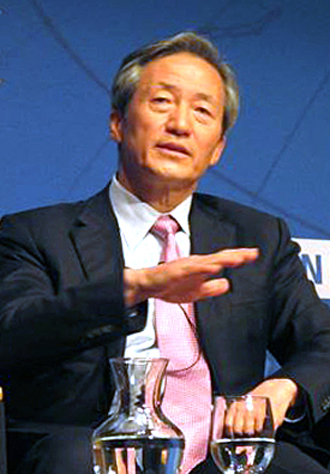 A prominent politician from the ruling Saenuri Party is arguing South Korea should arm itself with nuclear weapons by pursuing its own program or bringing back U.S. weapons to counter the North’s nuclear brinkmanship.

Representative Chung Mong-joon, a ranking member of the conservative ruling party, asserted Tuesday in Washington that diplomacy with the North has failed and the international community must reset its North Korea policy.

“Facing an extraordinary threat to national security, South Korea may exercise the right to withdraw from the Nuclear Nonproliferation Treaty as stipulated in Article 10 of the treaty,” Chung said in his keynote speech at the Carnegie International Nuclear Policy Conference.

“South Korea would then match North Korea’s nuclear progress step-by-step, while committing to stop if North Korea stops. South Korea should be given this leeway as a law-abiding member of the global community that is threatened by a rogue state with nuclear capabilities.”

“It would send a clear warning that, by continuing its nuclear program, North Korea is letting the nuclear genie out of the bottle in East Asia,” he said.

Chung also urged the United States to reintroduce tactical nuclear weapons that were withdrawn from the South in 1991.

“North Korea and, for that matter, China as well, should note that South Korea has this option if it persists in possessing nuclear weapons,” Chung said. “Nuclear proliferation in East Asia will unfold at the invitation of North Korea endorsed by China. The question for China is does it want South Korea to bring back U.S. tactical nuclear weapons or develop its own nuclear capability?”

Chung also said Seoul and Washington should nullify the agreement to hand over the U.S. wartime operational control to the South in 2015. He said plans to move the U.S. 2nd Infantry Division stationed near the inter-Korean border to southern areas must be stopped as well.

He also said dialogue between the United States and North Korea for denuclearization should continue.

Chung also said if the North shows no changes, regime change in the North will be the only way to resolve the situation, arguing that it won’t be as radical as many think.

Chung’s view, although not mainstream in Korea, is expected to raise a few eyebrows in Washington. Washington has barred South Korea from developing its own nuclear weapons with assurances that the country is under the U.S. nuclear umbrella.

“We are grateful for the security that the U.S. has provided us in the past, present and future,” he said. “The U.S. is our only ally. However, no matter how close we are, no two nations’ national interests can line up 100 percent.”

“Telling us not to consider any nuclear option is tantamount to telling us to simply surrender,” Chung said.

Chung’s remarks came at a sensitive time, as Washington and Seoul are scheduled to begin negotiations to rewrite a bilateral agreement on the civilian use of atomic energy scheduled to expire next year.

The 1974 pact bars South Korea from reprocessing nuclear fuel. Seoul is increasingly pushing Washington to lift the contentious restrictions as the country is dependent on nuclear energy and is running out of storage space for spent fuel.

In addition to the escalated war threats from the North, the issue is expected to come up when U.S. Secretary of State John Kerry visits Seoul later this week.

While Seoul calls for producing nuclear fuel for civilian uses, Washington is reluctant to allow it because the capability could easily be used to build nuclear weapons.

The United States has also reacted sensitively to the growing voices in the South about pursuing its own nuclear program.

“South Korea would do better spending the billions of dollars that nuclear weapons would cost on conventional capabilities that would actually enhance its security,” the newspaper said.

Chun Young-woo, former presidential secretary for foreign affairs and national security, said Monday at a seminar hosted at the Korea National Diplomatic Academy that it will be hard for Seoul to persuade Washington to accept its demand before the nuclear energy agreement expires, stressing the thorniness of the issues.

At the seminar, other experts, including Kim Dong-myung, a visiting researcher at Seoul National University’s Center for International Studies, also argued that bringing back U.S. tactical nuclear weapons can be an option to counter the North’s threats.

“Of all the options, those Chung mentioned are the ones the government must avoid,” Park Yong-jin, spokesman of the DUP, said yesterday. “He said we should think the unthinkable, but that’s an irresponsible remark we must never consider.”