Ability of young households to save is eroding

Ability of young households to save is eroding 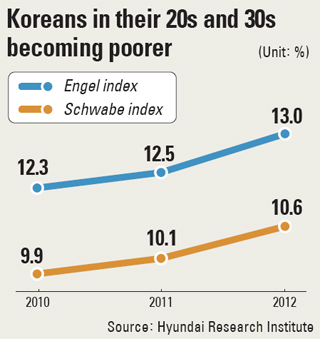 Park Nam-hee, a 29-year-old, has been tightening her purse strings since she got married two years ago. Though she and her husband both work, monthly spending on basic necessities such as groceries keeps growing.

“Out of what my husband and I earn every month, we spend a large portion on paying back the interest of loans we received to live on jeonse [lump sum deposit],” Park said, with a sigh. “On top of that, we spend about 500,000 won ($443) every month on food and groceries and 200,000 won on average on flat maintenance.”

Sounding depressed, Park said over the phone that she isn’t able to put even a penny into a fixed deposit account or installment savings.

According to a report released yesterday by the Hyundai Research Institute, Korean households led by breadwinners in their 20s and 30s are experiencing increasing hardship as their spending on food, housing and maintenance fees keeps going up. The report showed that the Engel index, which measures the percentage of household income spent on food, for Koreans in their 20s and 30s jumped from 12.3 percent in 2010 to 13 percent in 2012. The Schwabe index, which measures how much households spend on housing and other standing charges like electricity, went from 9.9 percent in 2010 to 10.6 percent in 2012.

The institute’s report noted that the higher increase in indexes for young people is mainly due to the high unemployment rate and rising interest burden.

Kim pointed out that the government plays an important role in providing young families with the opportunity to accumulate assets that are the foundation for future consumption of goods and services.

“For example, the government should expand the target group for those able to sign up for property accumulation savings products [that offer higher interest rates] so they’re able to save up their money,” he said.

Currently, salaried workers with less than 50 million won in annual income are eligible.